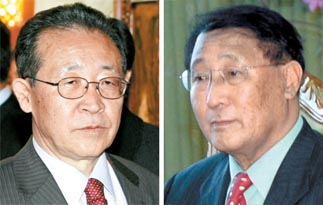 North Korea announced yesterday it promoted three diplomats who were key negotiators with the United States, a move analysts here said may be intended to improve Pyongyang’s ties with Washington to help stabilize the communist regime ahead of the anticipated power succession.

The country’s first vice foreign minister, Kang Sok-ju, was promoted as vice premier of the cabinet, according to the North’s Korean Central News Agency, which cited a parliamentary decree.

Ri Yong-ho, Kim’s deputy on the nuclear negotiating team, was promoted as vice foreign minister, it said in brief dispatches. The reports did not say whether Ri will succeed Kim as the top nuclear envoy.

The promotions were announced as North Korea prepares for a conference of Workers’ Party delegates next week, the first in 44 years, which is believed to be linked to leader Kim Jong-il’s attempt to name his youngest son, Jong-un, as his successor.

The conference, previously set for early September, was rescheduled for Tuesday. Pyongyang’s media did not explain the delay, although it reported heavy damage from floods.

As the former chief nuclear envoy for the communist state, Kang negotiated the 1994 Geneva Agreed Framework between Pyongyang and Washington, which called for the freezing of North Korea’s nuclear facilities in exchange for internationally financed light-water reactors.

Kang had been the first vice foreign minister for 24 years after being appointed to the post at the age of 47.

Kim Kye-gwan, one of the vice foreign ministers, was the chief North Korean representative to the six-nation nuclear talks when the participants agreed to joint statements on Sept. 19, 2005, and again in February and October 2007. Under these agreements, North Korea pledged to abandon its nuclear weapons and dismantle its nuclear facilities in return for financial aid from the dialogue partners - South Korea, the U.S., China, Russia and Japan - plus diplomatic recognition.

Ri has been a core member of North Korean delegations negotiating with the U.S. on issues such as nuclear weapons, disarmament, human rights and missiles. Beginning in 2003, Ri served as North Korea’s ambassador to Britain, Belgium, Luxembourg and Ireland before returning to the foreign ministry in 2007 and becoming the deputy nuclear negotiator.

Ri has frequently accompanied North Korean foreign ministers on their overseas trips, most recently in July when he traveled with Pak Ui-chun on a tour of Southeast Asia.

The promotions may be signs North Korea is trying to improve ties with the U.S. to keep its domestic politics stable, analysts here say.

“It’s important for North Korea to eliminate any negative influence on its domestic politics ahead of a power transfer, and as the Pyongyang-Washington ties worsened over time, they affected the stability of the leadership,” said Paik Hak-soon, a senior researcher at the Sejong Institute think tank.