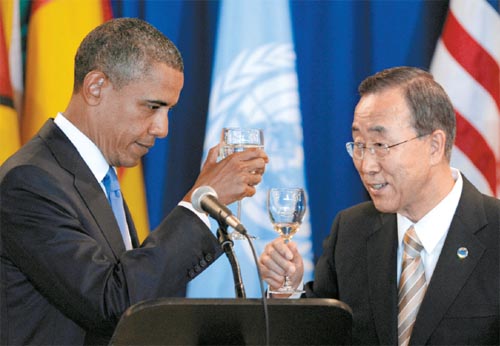 At the United Nations General Assembly in New York on Thursday, Obama delivered a speech that outlined a new foreign policy initiative focusing on promoting human rights and democracy around the world. The U.S. leader denounced North Korea’s rights violations and compared Kim Jong-il’s regime to other tyrannies around the world.

“Human rights have never gone unchallenged - not in any of our nations and not in our world,” Obama said. “Tyranny is still with us - whether it manifests itself in the Taliban killing girls who try to go to school, a North Korean regime that enslaves its own people or an armed group in Congo-Kinshasa that use rape as a weapon of war.”

The U.S. president’s condemnation was the latest pressure on Pyongyang following last month’s fresh financial sanctions to punish the North for the sinking of the South Korean warship Cheonan in March, which North Korea denies any responsibility for.

The remarks also came as the North apparently tried to improve ties with the U.S. by promoting three top officials who have been key negotiators with Washington in the past.

In his UN speech, Obama also compared the two Koreas economically and politically. “I’ll join the G-20 meeting on the Korean Peninsula,” he said, “which provides the world’s clearest contrast between a society that is dynamic, open and free and one that is imprisoned and closed.”

Meanwhile, a senior White House official made clear yesterday that North Korea’s handling of the aftermath of the Cheonan’s sinking is key.

“With regard to North Korea, we are looking to see the North take steps to address the grievances of the South in the wake of the Cheonan; that is a critical first step before there can be any sort of multilateral process,” Jeffrey Bader, senior director for Asian affairs at the National Security Council, said. “And then we would want to see some kind of behavior or manifestations by the North that indicate a sincerity about denuclearization.”

South Korean President Lee Myung-bak demanded in May that North Korea apologize and punish those responsible for the Cheonan attack.