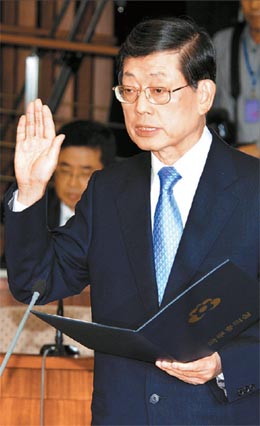 On the first day of confirmation hearings, Prime Minister-designate Kim Hwang-sik calmly responded to opposition lawmakers’ questions about his past, including draft-dodging and influence-peddling allegations.

Accused of dodging mandatory military service, Kim said yesterday that he was exempted from military service in 1972 because of anisometropia, a condition in which the vision in each eye differs by a wide margin, and emphasized that he still has vision problems. He also denied an allegation that he submitted a false medical report, issued by his elder brother’s hospital, to be exempted from service.

“My son completed his military duty,” Kim said yesterday. “I also have three elder brothers who completed their services. My family is not ethically lacking.”

After the embarrassing failure of the previous prime minister nominee, Kim Tae-ho, to get past corruption allegations during his confirmation hearings, the Blue House made a strategic choice of choosing Kim, who comes from the Jeolla region, the opposition’s traditional turf.

But a Democratic Party lawmaker fiercely criticized yesterday that his party was going too easy on Kim in the hearings.

“The Blue House invited the leadership of the National Assembly [to a dinner on Tuesday],” said DP Representative Jong Bum-goo. “It was inappropriate for the president and the ruling and opposition party leaders to dine together only 16 hours before the confirmation hearing opened.” The DP’s floor leader and acting head Park Jie-won and Representative Moon Hee-sang, the head of the special committee on the confirmation hearing, attended the Blue House dinner.

At the hearing, Kim projected a humble attitude. “I have refused [in the past] to accept the Blue House’s offer of the prime minister post because of my military exemption,” he told the lawmakers. “I probably deserve personal consideration for my physical inability to serve in the military, but I still believe it is more appropriate that those who completed their military duty are appointed as public servants.” Kim also brought two pairs of spectacles to show lawmakers the thickness of the lenses.

Kim also denied an accusation of influence-peddling. Dongshin University President Kim Pil-sik is Kim’s elder sister, and lawmakers asked him about an allegation that the school has enjoyed special benefits, including lucrative state subsidies, because of the university’s ties to Kim.

“Because my family knows well about my character, my elder sister has never made such request,” Kim said. “I am not a person who can act shamefully.”