The Germans who healed Koreans

The Germans who healed Koreans 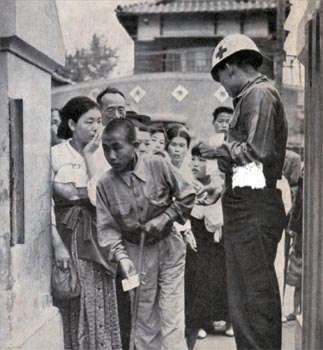 In this photo from a German Red Cross magazine in 1954, patients line up for treatment at the hospital in Busan. The magazine was provided by Dr. Wu Won-hyung, who worked at the hospital from 1956 to 1959.

“I still remember vividly the moment a German doctor came into my younger brother’s ward and treated him,” Choi So-ja, 66, reminisced about the aftermath of the Korean War. “He was such a handsome man with dark brown hair. He treated my brother daily for six months, and if it weren’t for him, my brother would have lost his leg.”

This year marks the 60th anniversary of the 1950-53 Korean War, and the stories of the 21 countries that deployed troops for the United Nations-led allied forces’ operation have been recalled by many. But the almost forgotten story of a devoted German medical team in Korea’s southern coastal city of Busan was first reported by the Monthly JoongAng only in May.

A stone tablet located at the former site of Busan Girls’ High School is perhaps the only physical remnant of the German Red Cross Hospital. “Dr. [Geunter] Huwer, the head of the German Red Cross Hospital, and 80 doctors and nurses as well as 21 Korean medical staff provided sacred and practical help to suffering Koreans not only from Busan but around the country. The education and work experience provided to Korean doctors and nurses made a profound contribution to the development of medicine in Korea,” the tablet reads.

Erected in 1997, the tablet memorialized the German Red Cross Hospital, which operated in Busan for five years in the aftermath of the Korean War. Dr. Choi Ha-jin, who worked at the hospital, and painter Lee Han-shik, who was a patient, built the tablet as a gesture of their appreciation.

Choi So-ja, the chairwoman of the board of directors at Ulsan High School of Arts, remembers the German staff’s help vividly because it meant so much to her family. In an interview with the JoongAng Daily on Monday, she provided detailed accounts of the time.

“I was a third-grader and my younger brother was five,” she said. “It was the day we were supposed to bring small gifts to the school to send care packages to soldiers. My mom forgot to give mine that morning so I went back home to get it. She sent my younger brother to a nearby cigarette store to buy something, but he was struck by a U.S. Army vehicle.”

She remembered the horrific wound on her brother’s leg. “One leg was barely attached to his knee. He was rushed to a U.S. military hospital in the area, but it took about 50 minutes because the American driver was in panic. At the hospital, the doctors said they had to operate on my brother’s leg. They said the only option was amputating it,” she said.

“As the military doctors debated, a German doctor from the German Red Cross Hospital arrived,” she said. “He assured us he would do his best to keep the leg. He performed surgeries, anchoring my brother’s leg with metal. My brother could not be moved to the German hospital because of his condition, but the German doctor visited him every day between 2 and 3 p.m. He didn’t skip a day.”

It took three major surgeries over six months for Choi’s brother’s leg to be stabilized. “The scars were terrible, but his leg was so perfect that after the treatment he went back to school and became a great runner,” she recalled. “He never lost a single race.”

After reading the Monthly JoongAng article in May and a subsequent report about the German Embassy’s search for Koreans with memories of the hospital, Choi contacted the embassy. “I was just too young to remember the doctor’s name,” she said. “He was in his mid-30s, about 175-cemtimeters-high, and a slim man. His hair and eyes were brown.”

“I remember he was such a handsome man,” Choi said. “I am not saying that because he saved my brother.”

Choi still hopes to be reunited with the German doctor. “I am 66 years old now, so he is probably in his late 80s or even 90s,” she said. “I hope he is still alive, and I can find him to show my true appreciation.”

After the reports about the hospital were published, the German Embassy tracked down about 40 Korean doctors and nurses who worked at the institution and invited them for a celebration of the 20th anniversary of German unification at the ambassador’s residence, set to take place tomorrow. Choi said she will attend the event to show her appreciation.

“Back then, West Germany was also rebuilding from World War II,” said German Ambassador to Korea Hans-Ulrich Seidt. “It had its limits to actively engage in assistance operations. At the proposal of then-U.S. President Dwight Eisenhower, German President Konrad Adenauer agreed to provide medical manpower to Korea. The United States provided money for the hospital,” he said.

He said the German Red Cross Hospital in Busan was the first point of German and Korean cooperation. Since then the two countries have maintained a strong friendship. In 1966, Korea sent 3,000 nurses and 3,000 miners to West Germany on a special employment contract.

Until 1977, 7,932 miners and 10,226 nurses worked in Germany and sent their salaries home. The remittances played a crucial role in building Korea’s economy in the 1970s, comprising about 2 percent of Korea’s gross national product at one time. The Korean government also succeeded in borrowing a commercial loan of 150 million Deutsch Mark from West Germany by using the Korean workers’ labor and the expected payments as collateral.

“The doctors and nurses who went to Korea to work at the German Red Cross Hospital in 1954 all had experienced World War II,” the ambassador said. “Perhaps because of that experience, they wanted to help people who are suffering from a war. They knew very well what it means to go through a war.”

Dr. Huwer, who headed the German Red Cross Hospital, made records of the medical team’s five-year service in Busan. In the documentation, he recalled that patients rushed to the institution as soon as it opened. “The flood of patients did not stop for one day for the five years of the hospital’s operation,” he said.

According to Dr. Huwer, Korean doctors and nurses who were hired initially for interpretation were soon trained to perform medical services. “Because of this hospital, 60 nurses were educated,” he recalled.

“For five years, the German Red Cross Hospital treated thousands of poor patients unable to receive medical help,” he wrote. “But there was a greater joy. Koreans had been bound by Confucianism and blood ties for hundreds of years. We have shown them the passionate spirit of humanitarianism that goes beyond blood ties, nations and races.”