At long last, FTA with EU is signed

At long last, FTA with EU is signed 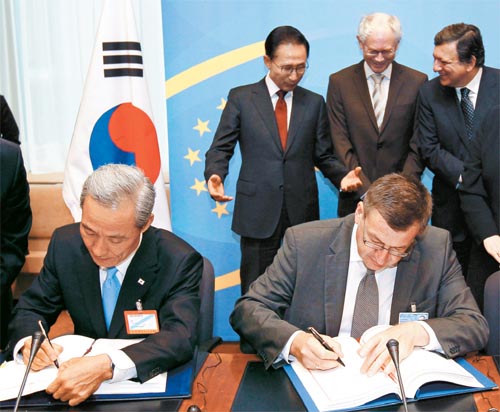 
The long-awaited free trade agreement between Korea and the European Union, the world’s largest market, was signed yesterday in Brussels, and both sides agreed they will aim to ratify the agreement by July 2011.

In contrast, ratification of an FTA between Korea and the U.S. is still pending, though it was made much earlier than the one with Europe.

The deal, which has been negotiated starting in May 2007, will lower tariffs, boost trade and investment, and create jobs for both Korea and the 27 EU countries.

The agreement was signed by Korea’s Minister for Trade Kim Jong-hoon and European Commissioner for Trade Karel De Gucht and others.

President Lee Myung-bak took part in the ceremony after he met with Prime Minister Yves Leterme of Belgium at the Egmont Palace and said the two sides should work hard to meet the ratification deadline.

“The Korea-EU FTA is a landmark event where this strategic partnership will benefit not just us, but the entire world,” said Herman Van Rompuy, president of the European Council. “We think highly of Korea, as Korea is the country within the OECD that is achieving the fastest annual GDP growth.”

“I am very happy that we signed the FTA with the world’s largest economic bloc, which is the EU,” said President Lee. “We are the first Asian country to have signed an FTA with the EU, and we will do our best before the ratification date of July 1 of next year to fully study and prepare for all effects the agreement may have on each industry.

“We have agreed to become a strategic partner and cooperate together for a successful G-20 Summit that will take place in Seoul in November,” he added.

According to research by the Korea Institute for International Economic Policy and 10 government-owned research institutes, Korea’s gross domestic product will rise 0.56 percent every year for the next decade. Also, up to 253,000 new jobs will be created as a result of the FTA, mostly in the service sector.

In addition, in the 15 years after ratification, Korea’s trade surplus with the EU will increase an average of $361 million per year, as exports are expected to rise more than imports from the EU.

According to the research, the manufacturing sector will benefit the most from the FTA with an increase of $395 million in exports each year for 15 years, while agriculture and fisheries are expected to be hurt the most because of increased imports of agricultural and fishery products from Europe. The trade deficit in agriculture will deepen by an average of $31 million a year, and for fisheries $2.4 million a year.

Auto industries on both sides are expected to benefit. Korean automakers and parts producers will expand exports to EU countries. Hyundai Motor, for example, is expected to boost exports from their Ulsan facility after tariff cuts. On the other hand, Korean consumers will have more choices of vehicles imported from the EU.

According to the Korea International Trade Association (KITA), Korean companies involved in trade with the EU have high expectations from the FTA, including an increase in trade, a decrease in raw material and facility costs, cooperation in technological developments and more European investments.

In a recent KITA survey of 337 companies in trade with EU member countries, 86.7 percent said that the FTA will help their business significantly, and 71.7 percent said exports will rise.

When the FTA takes effect, tariffs for 90.7 percent of industrial products will be wiped out, and the market will open up quickly. Almost 39 percent of the companies answered that they plan to switch their imports from other countries to EU countries.