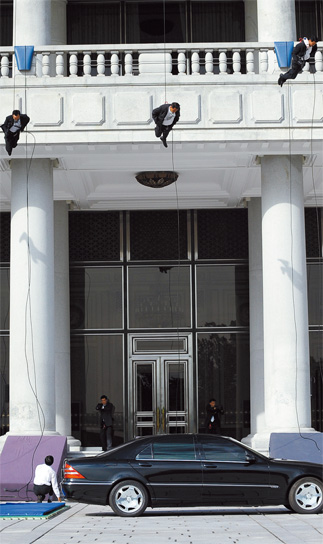 Security force agents for the G-20 Summit, which will be held in Seoul on Nov. 11-12, rappel down the front of the presidential guest house during an antiterrorism demonstration at the Blue House yesterday. [NEWSIS]

The government yesterday unveiled a beefed-up security plan to mobilize 60,000 police and military troops and spend 27.3 billion won ($24.3 million) for next month’s G-20 Summit in Seoul.

The G-20 Protection and Security Office, which controls security details for the event, said a three-layer security perimeter will be created around COEX, where the leaders of the world’s major economies will meet for two days from Nov. 11 to 12.

Traffic around the four main roads surrounding the convention center will be restricted, but not completely shut down, said Kim In-jong, chief of the Presidential Security Service and head of the G-20’s security office. “The intention is to provide perfect security measures while minimizing public inconvenience,” he said.

According to Kim, the outer layer of the security perimeter will be drawn within a 2- to 3-kilometer (1.2- to 1.9-mile) radius of COEX, separated by tall fences.

The middle layer will be the immediate area near the convention center, while the summit venue will be designated as the top security area. Bulwarks will be placed along the middle layer in order to stop possible terrorist attacks using cars, Kim said.

Access to the perimeter will be completely controlled from midnight to 10 p.m. on Nov. 12, when the actual summit takes place, Kim said.

Olympic Park in Jamsil, about 5 kilometers away from the summit venue, was designated as a peace protest zone to allow activists to express their voices. “We, however, will sternly stop any violent protests,” Kim said.

Of the 60,000 troops, about 40,000 will be assigned to protecting the venue and leaders, while the rest will be in charge of controlling protesters, Kim said.

Kim said the threat of international terrorist groups and North Korea has been assessed to provide the best security protection for the summit.

Under Kim’s leadership, the Presidential Security Service, the National Police Agency, the military, the National Intelligence Service and the National Emergency Management Agency will cooperate to beef up security not only at COEX but at major landmarks and public facilities around the nation.

Kim said his team’s simulations showed that traffic near COEX will slow down about 30 percent, while a simulation done by the National Police Agency predicted worse traffic. “We, however, are confident that with the proper campaign and the public’s cooperation, the traffic jam will not be too terrible,” he said.

Since the roads surrounding COEX will largely be controlled, Kim said detour information will be provided to the public in advance. The Hyundai Department Store located in the vicinity of the convention center will operate since it will not be included inside the security perimeter, he said.

The 435 restaurants and shops inside COEX Mall, adjacent to the convention center, will also operate, though the number of customers will inevitably drop because of restricted access to the area. On average, about 120,000 people use the facilities in the mall per day.

“We will encourage the 15,000 delegates, media and security personnel who will be at COEX during the time to use the facilities in the mall in order to minimize business losses,” Kim said.

According to Kim, more specific details, particularly concerning public access to the security perimeter, will be announced on Oct. 25.

Kim also highlighted Korea’s advanced technologies that will be used at the summit venue. A facial recognition system using radio-frequency identification will be installed at COEX, and small phones will be provided to the security teams of the participating countries to update information in real time. “The facial recognition system has been able to distinguish twins,” said Kim.

Security at Seoul’s major airports - Incheon and Gimpo International Airports - will also be enhanced, Kim said. The leaders’ planes will be escorted by Korean fighter jets, and the leaders’ overland travel from the airports to hotels and the summit venue will be tightly monitored by cars and helicopters.

“All our actions were planned to be carried out under the special law governing security details for the G-20 Summit,” Kim said. “The law is effective from Oct. 1 to Nov. 15.”

Kim also stressed that the dispatch of military troops is inevitable and legitimate, and is only meant to keep the public safe. “The deployment of about 10,000 troops [out of the 60,000 personnel being mobilized] is far smaller than what happened in the United States and Canada,” he said.