THE LONG MARCH NORTH
The final push into Pyongyang

In October of 1950, an American soldier uses a flamethrower to destroy an enemy post near the 38th parallel. [JoongAng Ilbo]


In many ways, war can be compared to a large-scale construction project. The person in charge needs to recognize how to make improvements in areas where they are needed and make proper adjustments for areas that are getting too much attention.

When going on the offensive, one needs to boldly dispatch military personnel and provide necessary firepower. But when a situation calls for withdrawing troops, the decision must be made without hesitation. In carrying out this movement, one needs to have a firm grasp of what is happening on the front lines and a firm understanding of the enemy’s hidden agenda and intentions, as well as the enemy’s weaknesses.

The suffering and sacrifices made by those fighting goes without saying, but the commanders making key decisions behind the front lines are often faced with tough decisions that can lead to potentially grave results.

The Battle at Jidong-ri, which is located roughly 20 kilometers (12.4 miles) outside of Pyongyang, turned out to be tougher than expected. We were pressed for time with the U.S. 1st Corps ahead of us, but we had no other choice but to try to forge ahead. We simply did not have any other options.

The enemy had set up numerous posts in the hills on both sides of the entry into Jidong-ri and fired machine guns and mortar rounds.

The fierce fighting, which started at 6 p.m., continued into the night with the enemy showing no signs of retreating. The Americans, who detested night fighting, responded fiercely, using tanks to shoot into the hills. But with enemy posts dispersed throughout the hills, it was difficult to pinpoint enemy locations.

It was around 4 a.m. when we began to see positive signs. The ROK 12th Regiment put up a valiant fight, going right up to the foot of the hills, while the Americans provided heavy artillery fire in support, which seemed to deter the enemy somewhat. We finally got the feeling that enemy resistance was decreasing. 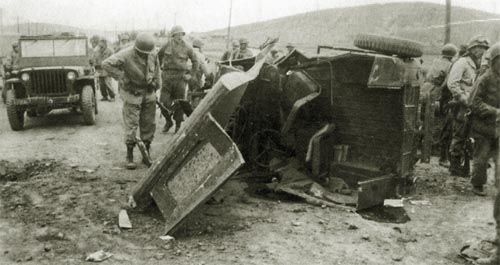 Personnel of the ROK 1st Division inspect a jeep destroyed by an enemy land mine near the Daedong Bridge on Oct. 19, 1950. The ROK 1st Division had to deal with a large number of land mines as it got closer to Pyongyang. Provided by Gen. Paik Sun-yeop


The enemy troops were beginning to leave their posts. They must have felt they were being pushed to the brink of defeat. Loss of confidence in the heat of battle can lead to collapse. The battle, which started at around 6 p.m., finally came to an end 10 hours later with the ROK 12th Regiment making its way up the hill to check on the withdrawal of enemy troops. During the intense battle, I had ordered my men and asked our allies not to fire at the numerous cultural assets in the area.

Having defeated the enemy at Jidong-ri, we now had a clear path to Pyongyang. It was day break when we left the area and we were met with wide open spaces. The U.S. troops operating the tanks were ecstatic to see what they called “tank country.” In contrast to the mountainous regions with narrow winding roads, the area was easy for tank operators to maneuver their machines.

We were now back in position to enter Pyongyang ahead of the U.S. 1st Corps. After Jidong-ri, we now had some breathing space and I became curious as to where the U.S. 1st Corps was located. I asked the United States Air Force liaison officer to find out the location of the U.S. 1st Corps. Soon, an LT-6 “Mosquito” aircraft was seen hovering in the air over us. It was trying to determine our location and that of our allies who were also making their way toward Pyongyang. They had defeated enemy forces in Joonghwa-ri and therefore were ahead of us in the race, but not by much.

As we made our way deeper into the fields toward Sadong, we were met with enemy fire again. According to our reconnaissance team, there were two enemy divisions located in the area. Again, we were greeted with machine-gun fire and mortar rounds, but we were not to be deterred and continued to forge ahead.

It was at that time our communications officer Major Yoon Hyuk-pyo came to me in haste holding the receiver of a portable phone.

“We have telephone contact with the enemy,” said Colonel Yoon. “I contacted the North Korean People’s Army Headquarters switchboard and I’m afraid they’ll catch onto the act since I don’t speak with a northern accent.”

The ROK and UN troops enter Pyongyang on Oct. 19, 1950. The enemy troops put up resistance, but the allied troops were able to defeat them in a short period of time. [JoongAng Ilbo]


This meant we could pose as North Koreans and communicate with our enemy in Pyongyang in an effort to gain valuable information. Since I was born and raised in Pyongyang, Colonel Yoon asked me to speak on the phone.

“Comrade, how are you holding up?” I asked using my northern accent.

The voice on the other end of the line didn’t even bother to ask who I was and stated in a panic-stricken voice: “The Americans are entering the city with hundreds of tanks.”

The person stated that his men needed to retreat and save themselves, and then he hung up.

The North Koreans were succumbing to pressure and they were being destroyed a lot quicker than I thought. The two North Korean infantry divisions flanking the area near Sadong failed to put up much of a fight. Knowing that their supporting troops were defeated to the rear, they could not muster a strong attack. They did fire off some machine guns and mortar rounds, but when we responded with a prompt and strong attack of our own, they retreated quickly.

We did face some trouble along the way, but they did not represent a challenge to the tanks and firepower under our command. Our biggest concern at this point was not the enemy but land mines. The enemy had constructed their land mines out of wooden boxes and therefore were not detectable with our land mine sensors.

We had no other choice but to use one of their prisoners of war to point out the spots where they had planted the land mines. They were cooperative and the American experts removed and detonated the mines.

We were now crossing Daedong Bridge and Pyongyang was within sight. It was the first time I had returned to my hometown since I left in December 1945. I was overcome with emotion.

We were to rendezvous with the U.S. 1st Corps at a rotary near Daedong Bridge. We arrived ahead of our counterparts at 11 a.m. The Americans were nowhere in sight. We had won the race.

Around this time, we heard a loud noise and smoke bellowing from a nearby area. The enemy had destroyed the Daedong Bridge. The middle portion of the bridge was now completely gone. The enemy was now busy setting up a defense post near the bridge.

We were ahead of the U.S. 1st Corps by about 30 minutes. The U.S. armored vehicle personnel were preparing a banner to commemorate our entrance into Pyongyang. I thought it was all too much and tried to stop them, but they grew angry and stated that as part of the ROK 1st Division, they were proud of being the first to arrive in Pyongyang.

From afar, I saw U.S. 1st Corps Commander, Major General Frank W. Milburn and Major General Hobart R. Gay, the commander of the U.S. 1st Cavalry Division. General Milburn asked us both to shake hands in front of the photographers and journalists who had accompanied General Milburn. General Gay did not say a word as he shook my hand and looked upset at having arrived in Pyongyang behind the ROK 1st Division.

We continued to face enemy fire in various parts of Pyongyang. Such firefights took place throughout the city as the ROK and UN troops attempted to gain complete control of the city.