Soul musician shows his creative side

Soul musician shows his creative side 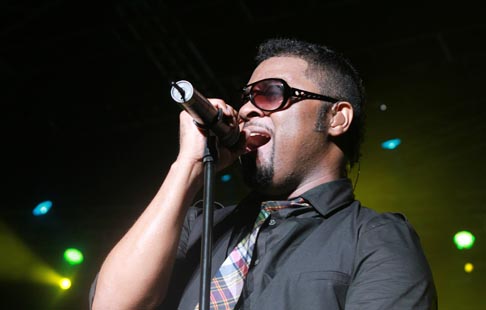 Musiq Soulchild performed a two-day gig at the Seoul Soul Festival on the weekend. Provided by Southern Star Entertainment


Musiq Soulchild landed in Korea and did what all tourists here do. He went shopping.

His first impression of the country?

“This is only my second day here and I’m still feeling the mood of the place out,” Musiq said on Saturday, the first day of his two-day gig at the Seoul Soul Festival, where he made his Korea debut. “On the first day, I just walked around the mall. I was able to meet many different people and talk to them.”

He said it was difficult to get people to talk to him, perhaps because the sight of someone famous wandering a mall came as a shock to fans.

“I guess I didn’t go out looking like what they would expect me to look like,” he said. “I think people recognized me but they didn’t know that it was me so they didn’t know how to approach me.”

Musiq’s music is a mixture of genres, from R&B and soul to blues, hip-hop and rock. He creates songs that are both romantic and emotionally moving, which is a hit with Korean fans. But it’s the creative aspect of music that interests him most.

“My songs are romantic because romance sells. Unfortunately, that’s the reality - people identify with romantic music more especially in regards to R&B,” the artist said. “But my creativity comes from life itself. From the moment I wake up to the moment I go to sleep. Even when I’m asleep, I’m inspired to think creatively.”

His creativity can be seen not only in his music but in his lyrics as well. Musiq often plays with phonetics in the titles of his songs and albums to make them a little more fun.

It is this creative spirit and his interest in finding new musical combinations that made him curious about Korean music. He said he may even try to incorporate Korean sounds into his work in the future.

“I feel that when I stay here long enough, I’ll learn about Korean culture, what would be classified as authentic Korean music, and I will try to include that in the concept of soul music,” he said. “I’m always doing my best to expand my music so that I can entertain people according to the particular style that they enjoy.”

He said he was also hoping the festival would provide him with an opportunity to learn more about the Korean music scene.

“I’m really looking forward to seeing, hearing and enjoying the other acts,” he said. “I’ve heard a little bit about Jay Park. I heard that he is a fan and I’m totally grateful.”

Park, who is known here by his Korean name Park Jae-beom, is an American b-boy and musician, and the former leader of the Korean group 2PM.

On the last day of the festival, the two artists performed on the same bill and Park joined Musiq in a duet of his song “Love.”

Musiq said he was hoping his performance would show fans another side of his music.

“My albums will act like a guide, like a map, to what you’re about to experience,” he said. “I’ve changed some of the arrangements of the songs so that I can show depth and creativity. I want to open up people’s expectations with this performance.”