Hwang to get burial in National Cemetery

Hwang to get burial in National Cemetery 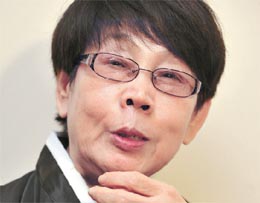 And Hwang’s South Korean adopted daughter shared memories of him with the JoongAng Ilbo, denying recent reports that he had a son and a common-law wife in South Korea.

The Ministry of Patriots and Veterans Affairs said that Hwang’s remains will be buried at the National Cemetery in Daejeon today. A ceremony was scheduled for 3 p.m.

“After a review, we decided that he was qualified to be buried at the National Cemetery,” said an official. Hwang, who defected to the South in 1997, died Sunday in a safe house in Seoul at the age of 87. The government posthumously conferred the Grand Order of Mugunghwa for his efforts to democratize North Korea after his defection, fulfilling the requirement for burial at the cemetery. As many South Koreans mourned his death, Hwang’s adopted daughter Kim Suk-hyang told the JoongAng Ilbo about her memories of the man who created the Juche, “self-reliance,” ideology of the reclusive North Korean regime, but later renounced it and all loyalty to Kim Jong-il, whom he taught in university. “I met Hwang in Shenyang, China, in the spring of 1995,” said Kim, a South Korean national. “At the time, I was a Christian missionary.

“My first impression of Hwang was that he was a very upright man,” she said. “He looked like a man of strong integrity and a typical scholar.” At the time, Hwang was the Workers’ Party secretary in charge of international affairs, who had the rare privilege of traveling abroad from the tightly controlled North. After their first meeting, Hwang and Kim got together every day for four more days, having conversations that centered around South Korea and its economic development.

“Then on the fourth day, I carefully asked him about the situation in North Korea,” Kim said. “He said the economic situation in the North was very difficult, without giving details.”

Kim recalled that she bought Hwang a Swiss-made watch, worth about 380,000 won ($339), as a gift at the time. “After I met Hwang, I felt very sad,” she said. “When I talked about South Korea’s GDP and its economy, he seemed very inspired about freedom and a restriction-free environment.”

She said their relationship continued through meetings in China and other countries when Hwang traveled abroad. “We met once a month, sometimes twice,” she said. “It continued until his defection in 1997.”

In the interview, Kim denied earlier media reports that Hwang had a wife and a son in South Korea.

“It is very regretful that such a story came out during the mourning period,” Kim said. “If there is a wife and son, they should come to me,” Kim said. “I have never seen them with my own eyes.” “About four to five years after Hwang’s arrival in the South, I suggested that he should find a good partner,” Kim said. “But he flatly rejected it. He said he didn’t want to because he left his family behind in North Korea. He was a man of warm heart and cared for many people. Why would he have a wife and son out of wedlock? If he wanted, he would have married and had a legitimate family.”

Kim also denied reports that Hwang left considerable wealth. “He was a scholar and had no greed for money,” she said. “Nor did he have the opportunity to save a fortune.”

“Hwang and I had many deep conservations, but he never talked about money or a woman,” she said. “When he was alive, he said he would leave everything to the country.”