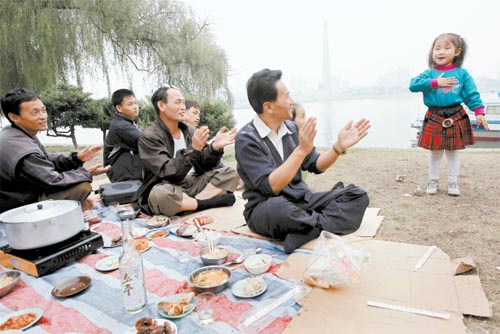 A North Korean girl sings as her family picnics along the Taedong River in Pyongyang, North Korea, on Monday. North Korea doled out special rations such as candies, meat and booze to its people to celebrate Sunday’s 65th anniversary of the Workers’ Party, and North Koreans took Monday off to celebrate the major political event and to officially revel in their first public glimpse of leader Kim Jong-il’s chosen successor, son Kim Jong-un. [AP/YONHAP]


The youngest son of North Korean leader Kim Jong-il is in the spotlight after being officially named successor to his father.

But his passed over older brother, Kim Jong-nam, refuses to go away quietly.

Japanese media caught up with Jong-nam, who largely lives abroad after falling out of favor in 2001, in Beijing last Saturday, and asked him some pointed questions about his younger sibling’s rise to power and prominence.

“I am against the third-generation succession,” Kim Jong-nam, sporting a red sweater and sunglasses, told TV Asahi. (If the twenty-something Jong-un eventually takes power, he will succeed his father and grandfather Kim Il Sung, North Korea’s founding leader.)

But then Jong-nam back-pedaled, saying, “I believe there must have been some internal reasons [for Jong-un’s succession], and if those reasons exist, I think they should be followed.” 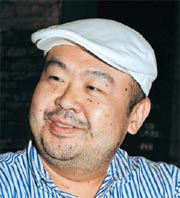 When asked by the Japanese network about his being passed over despite the fact that he’s Kim Jong-il’s eldest son, Jong-nam said, “I have not had any remorse or interest in that issue, so it does not matter to me.”

Kim Jong-nam had repeatedly denied interest in being North Korea’s next leader during brief encounters with the foreign press over the years, including an encounter with JoongAng Ilbo reporters in Macau in June. His nonchalance about the succession had been seen by analysts as a way to avoid conflict with his younger brother and father over the issue and any repercussions, including personal harm to himself.

When asked why Jong-un was named successor, Jong-nam answered, “That was because of my father’s decision. I hope my brother will do his best for the people and their material lives. I am willing to help my brother even if I am abroad. I will help him whenever.”

Kim Jong-nam’s negative reaction to the third-generation succession, coming a day before the 65th anniversary of the founding of North Korea’s Workers’ Party, suggests he is personally opposed to his younger brother being handed the reins, but analysts don’t interpret that as a challenge to Jong-un.

“I think he’s calculating very closely. There have been expectations that there might be a tussle over power between the two brothers,” said Yang Moo-jin, a North Korea expert at the University of North Korean Studies in Seoul. But now Kim Jong-nam is showing his father and cronies that he’s not a threat, Yang said, but an asset to the regime outside the country.

Another South Korean government official stated the move to be “one for survival” for Jong-nam.

While wrapping up a visit timed for the anniversary celebrations on Sunday, Zhou Yongkang, a senior Communist Party leader, met with Kim on Monday and delivered a message from President Hu Jintao inviting Kim Jong-il and the new leaders of the Workers’ Party to China. Jong-un was reported by China’s official Xinhua News Agency to have been present during the meeting.

According to Xinhua, Kim Jong-il expressed satisfaction with the “healthy development in the relationship between the two countries” and said, “young and talented comrades have been selected as leaders during our recent Party convention.”

As Jong-un is one of the “new leaders,” Hu’s invitation can be seen as the first sign of Beijing’s approval.