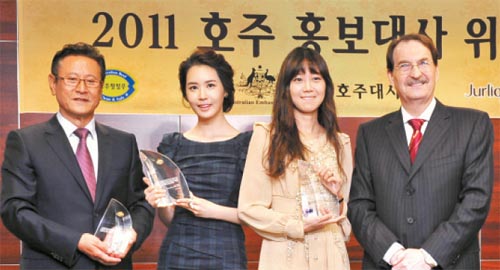 “I’m very pleased to announce the four very well-known Koreans as next year’s Austrailia’s Goodwill Ambassador,” the Australian ambassador Sam Gerovich said. “The embassy will make a series of events next year, beginning with Jan. 26, the Australia’s Day.”

At the ceremony, Korean celebrities who have close ties with Australia attended to be officially appointed as Australian Goodwill Ambassadors: Park Keun- hyong, Kwone Sang-woo, Lee Da-hey and Kong Hyo-jin.

“When I visited Australia 20 years ago, there were only 15,000 Korean nationals living. But now the number of Korean immigrants in Australia increased to ten times more than the previous number,” Park Keun- hyong, one of the celebrities said. “We will do our best to promote the ties with Australia as goodwill ambassadors.”

South Korea and Australia designated next year as “Year of Friendship”, in celebration of its 50-year old bilateral relations. According to the ceremony, the two countries promised to operate lots of exchange programs and cultural events to make a stepping-stone for continuing the friendship from now on.

The relationship between two countries started in the Korean War when the 17,164 Australian soldiers were dispatched to shield Korean Peninsula. In Australia, monuments and footages to remember those soldiers in the war still remain across the country.

Since 1995, the Australian government have given humanitarian aids for North Korea, in an effort to participate in keeping peace on Korean Peninsula.

For South Korea, Australia is the third country popular among students who want to study abroad. According to statistics, more than 20,000 Korean students fly to the country to study in its local universities. Since the Australian government actually abolished the “White Australia” principle in 1973, which used to restrict non-Caucasian to immigrate, now there are 120,000 Korean immigrants living in metropolitan cities.

“Particularly, during the Year of Friendship, we will appreciate for the very important and positive role of Korean communities in Australia, serving as great connection to Korean society.”