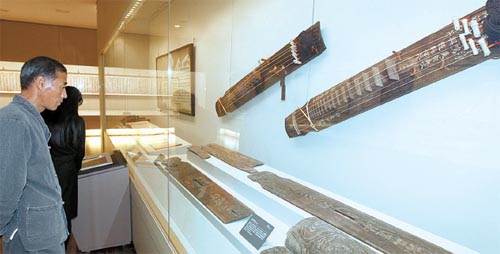 A visitor appreciates 350-year-old geomungos, a Korean zither with six strings, yesterday at the opening of the Yun Seon-do Museum in Haenam, South Jeolla. The museum exhibits 4,600 artifacts owned by descendants of Yun, including the Mi-indo painting, “A Portrait of Beauty.” Yun was a government official and scholar in the mid-Joseon Dynasty (1587-1671) who is remembered for his talent in poetry as well. The instruments on exhibition were made and played by Yun himself. [YONHAP]