A first film short on substance, long on cliches

A first film short on substance, long on cliches 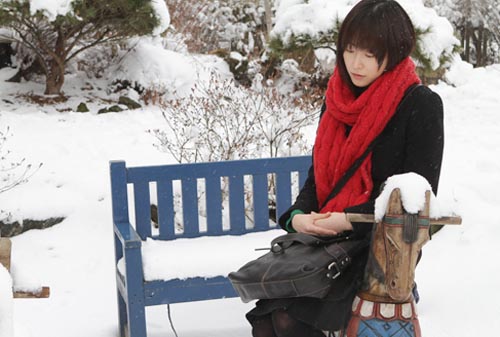 Ji-eun (Suh Hyeon-jin) is involved in a love triangle in “Magic.”Provided by CJ Entertainment


Judging from her recent directorial debut “Magic,” it seems emerging actress Koo Hye-sun, who rose to fame on the popular television drama “Boys over Flowers,” is aching to grow up fast and be taken seriously.

The coming-of-age story - which was written and directed by Koo, who also stars in the film - centers around the love triangle that develops between three music school students and its tragic end.

Soft-spoken and timid, Myeong-jin, played by Lim Ji-gyu, plays the cello and is infatuated with piano student Ji-eun, played by Suh Hyeon-jin. The handsome, aloof loner Jeong-wu, played by Kim Jeong-wook, also plays the cello and has perfect pitch. But he has a terminal disease, and little time left to live. And yes, you guessed it, he is also in love with Ji-eun.

The three don’t express their feelings for each other out loud, but when one of them does at the end, it destroys the fragile trio.

The plot reflects the familiar dynamic of cinematic love triangles - the shy, studious and self-doubting guy is pitted against the talented bad boy, who carries a certain untouchable air of superiority towards everyone, in an all out battle to get the girl.

Through the inexperienced and rather naive eyes of the 25-year-old Koo, the story ends up as a mere shell of itself.

In fact, the three young characters seem nothing like any young person I have ever encountered, either in film or in real life, in that they seem like figments of Koo’s idea of what it’s like to be mature before your time.

The actors’ lifeless expressions and affected, melancholy speeches (which will probably make them cringe in 10 years), turn the characters into puppets that play out the director’s uninspired idea of what growing pains are.

The thing that leaves the audience cold in the end is that instead of using the substance of her own reality to build up the story, Koo fabricates scenes out of other similarly themed movies and follows the tired conventions that usually go along with them.

In doing so, Koo misses the mark on the one thing that might have shielded her as a first-time filmmaker from the flood of criticism coming her way - sincerity.

However, instead of giving us characters we can relate to and details about who they are, she relies on pretty visuals and vaguely abstract dialogue that feels like a bunch of famous quotes from random books.

Magic thoroughly confirms the fact that passion for cinema alone does make a good director.