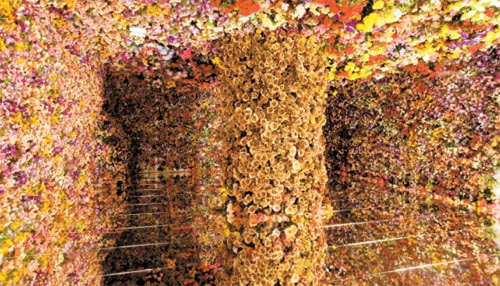 The installation “Paradise of the Lost Maze” by Jheon Soo-cheon is part of the artist’s solo exhibition at the Pyo Gallery in Itaewon, central Seoul. Provided by the artist


Flowers fill a corner of the Pyo Gallery in Itaewon, central Seoul. But the beauty of the space is deceptive. The flowers have no fragrance - they are artificial. And what at a first glance looks like an underground space filled with flowers is just a reflection on the mirrored floor.

This is the installation “Paradise of the Lost Maze” by Jheon Soo-cheon.

“In our time of materialism and instant input, people don’t look closely at things, including flowers, so they cannot tell real things from artificial ones,” he said. “And they wouldn’t try to go through a labyrinth, even if it led to paradise.

“Happiness can be found in wandering and trying to find a way but the people of our time neglect it. They are interested only in instant and immediate things. My work is about these.”

Jheon is also exhibiting a photo series entitled “Reading Dissimilarities Between Objects,” which shows a mix of real and artificial flowers.

He is best known for his large-scale “Moving Drawing” project. In this project, which he did in the United States, he covered a train with white fabric and then took aerial photos of the train as it ran along a curved railway. The resulting image looks like a long, flowing line of calligraphy.