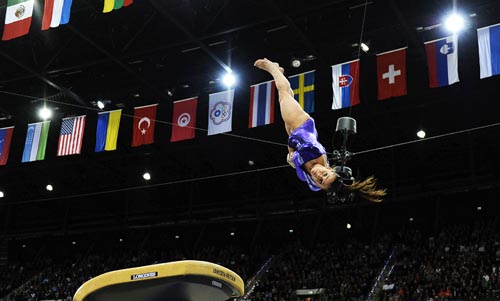 Alicia Sacramone of the U.S. won gold during the women’s vault at the Gymnastics World Championships on Saturday. [REUTERS/YONHAP]


ROTTERDAM, Netherlands - If people think two years is a long wait, consider Alicia Sacramone’s 30 minutes on Saturday. Sacramone came back to gymnastics looking for redemption, too long convinced that her spills at the 2008 Beijing Games cost the United States gold against the hosts.

Then, amazingly, the 22-year-old Sacramone capped her return from retirement with a world championship gold medal in the vault, beating 16-year-old Russian genius Aliya Mustafina on Saturday.

Or so she thought.

The Russians protested Mustafina’s judging assessment and what followed was her “tragic wait” as the judges deliberated.

“That was like the longest 30 minutes of my life,” Sacramone said.

Hands to her hips, staring blankly ahead, she waited with her coach Mihai Brestyan while other competitors, oblivious to the controversy, came over to congratulate her.

Then the judges finally threw out the Russian complaint. Before Sacramone knew it, she was back atop the podium, taking in the Star-Spangled Banner she had so desperately wanted to hear in Beijing.

With her gold she not only chased away those demons, but also joined Shannon Miller and Nastia Liukin as the U.S. athlete with the most medals at the world championships, with nine overall. And it gave the United States its first gold at the nine-day championships.

The whirls and twirls of a well-executed vault are over in a flash so it takes months of consistency to preprogram such flights of fancy in the brain. It is experience where Sacramone certainly had an edge over rookie Mustafina.

“I am focused on counting my step and making sure that the entry into the [vault] table goes well. After that, it is autopilot and you go through to the finish,” she said. At her age, “it is just kind of like a walk in the park.”

A golden one at that.

Her two vaults were solid and gave her a 15.200 average. When Mustafina followed with a first vault of 15.733, it seemed Sacramone was reduced to silver at best.

Still, Mustafina had shown one slight weakness on her second vault in qualifying.

On Saturday, the judges deducted heavily for a technical deficiency. It made the difference between silver and gold as her average slumped to 15.066.

“Her landing was a little bit low and I was kind of waiting it out like everybody else,” Sacramone said.

The Russians protested vehemently, but they were literally too late. A formal protest must be filed before the next gymnast ends their routine, and Russia had waited too long. The minutes that ticked away put it all in perspective for Sacramone.

“To walk away from gym the way I did, with so many injuries and to be disheartened, and then come back, work hard and get a big reward for all the work that I’ve done, it makes it worth the while,” she said.

It is also the U.S. team’s gain. Sacramone has the ebullience and swagger needed to carry a young team still missing veterans like Liukin. She crashed off the beam and fell to the floor in the team competition in Beijing and that sinking feeling stayed with her for a year, leading her to announce her retirement. Few thought she could come back.

“After the experience in Beijing - it wasn’t the best for her personally - she showed she has a strong character and is able to work with the psychological factor also,” said U.S. national team coordinator Martha Karolyi. “So that is a great accomplishment.”

That golden step is now taken and she still has the beam final for Sunday.

For next year, she wants to add the floor again too.

“She still has the joy and she definitely is dedicated to keep going,” Karolyi said.

Korea’s Jo Hyun-joo, who became the first female Korean gymnast to advance to the finals, finished sixth out of eight competitors on the vault Saturday.