Each year, Koreans anticipate the arrival of the fall foliage, which signals the beginning of hiking season in Korea.

This season, the changing of the leaves brings both good and bad news. The good news is that the foliage is particularly lovely this season, thanks to a good balance between the right temperature and an appropriate amount of precipitation. And according to workers at Seoraksan National Park, this year’s display of leaves is the prettiest in the last five years.

Recently, the JoongAng Ilbo Week& team set out for a visit to one of the year’s most attractive sites for an autumn hike - Gayasan National Park in Seongju, North Gyeongsang. Our trip took us to the Manmulsang Trail, known to be the most scenicplace for beautiful red-tinged leaves. The trail is opening for the first time in 38 years - and the Week& team was first in line to see it.

The Manmulsang Trail is the main trekking course on the Gaya Mountains. The trail’s name, Manmulsang, means mountains of numerous shapes and sizes. 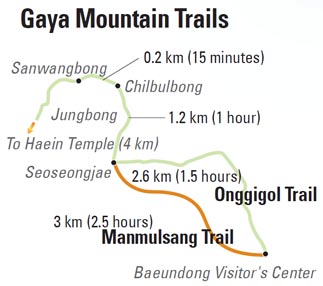 The trail currently greets over 5,000 tourists a day. One of the reasons for its popularity this year is that it opened to the public in June for the first time since it was designated a national park in 1972.

Park employees expressed reluctance about receiving any more media coverage because of concerns that a new flood of visitors would create excessive traffic around the trekking areas and destroy the environment. The JoongAng Ilbo Week& team was able to get authorization for this article only with the assurance that the focus would be on decreasing traffic by highlighting detours from the main trails.

The main course starts off at the Baekundong Information Center and connects the Manmulsang Trail with Seoseongjae Pass, which is 3 kilometers (1.9 miles) long. The team was greeted by Bae Hyun-sook, a park employee who has worked to protect the Gaya Mountains for over 10 years.

Bae told us that many temples small and large were built in the area beginning in the Unified Silla Dynasty, and that many still remain.

“The mountainous terrain, with its numerous valleys, was the perfect place for monks to train and meditate,” Bae said. “And it matches perfectly with the feng shui interpretation of a perfect spot for housing.”

The Manmulsang Trail in Gayasan National Park in North Gyeongsang, gets crowded in fall and closes at 1 p.m. so it’s best to get an early start.

Haein Temple is one of the main attractions in the Gaya Mountains. It is one of the three most treasured Buddhist temples in Korea, along with Tongdo Temple in South Gyeongsang and Songgwang Temple in South Jeolla. Haein Temple is most famous for housing the Tripitaka Koreana, Buddhist scriptures carved onto 81,340 wooden printing blocks, and it is surrounded by a number of smaller hermitages.

The Manmulsang Ridge spreads along the eastern side of the Gaya range while Haein Temple is located on the western side.

As we made our way up the trail, we discovered that there are hardly any stairs here, even on the ascent.

“The Gaya Mountains have a lot less stairs than other mountains do,” Bae said, adding that they had minimized the amount of stairs prior to the grand opening of the trail.

“People like having the feeling of dirt under their feet,” Bae said.

Bae tells us it is best to start hiking as early as possible and says that the best hours to start are from 6 to 9 a.m. The full hike takes around four to five hours. All entrances to Manmulsang Trail close at 1 p.m. 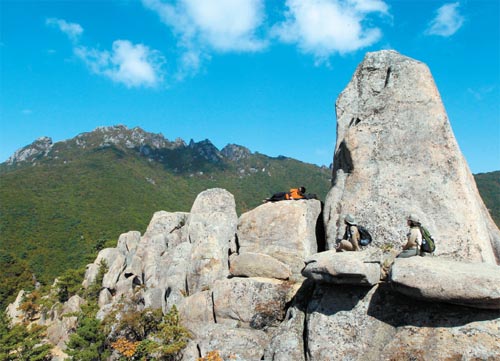 The view from the fifth rock formation on the Manmulsang Trail is magnificent and will take your breath away. Photos by Kwon Hyeok-jae


We set out in the wee hours of the morning, which turned out to be a perfect time for a quiet, peaceful hike. Historical documents say that the southern part of the Gaya Mountains was once filled with Korean pine trees. These days, oaks and broadleaf trees seem to be taking over.

The shady one-kilometer trail leads to a group of stone formations near the top of the mountain. After about an hour, we reached the official start of the bumpy Manmulsang Trail, which starts at 700 meters (2,297 feet) above sea level and ends 1,100 meters above sea level.

Along the way, there are nine pillars of rock of about the same size. The view from the fifth rock formation is magnificent and will take your breath away. To the north, we could see Chilbulbong Pillar, which looks like seven Buddhist monks (chilbul means “seven Buddhist monks”). Underneath our feet, there were stones that seemed to take the shapes of elephants, turtles, frogs and even a monk reading a book. Each stone pillar and ridge seemed as though it had its own story to tell.

The last rock formation is called Sangadeom, and it is located at 1,130 meters above sea level. This is the perfect spot for a photo, with a full panoramic view of the trail. In the fall, when there are a lot of people visiting the area, it takes about three hours to reach this point because many spots along the path allow only one or two persons at a time to pass.

To get to Chilbulbong Peak, we went through Seoseongjae Pass, which is below Sangadeom. The area is covered with pine, Stone Pine and Oriental oak trees that have just started to change colors.

From Seoseongjae Pass, it takes about 40 minutes to get to Chilbulbong Peak, which has the most scenic views of the changing foliage.

The mountain’s other main peak is Sangwangbong Peak, which is a 15-minute hike from Chilbulbong. And the 300-meter area from Sangwangbong Peak to Udobong Peak is simply a masterpiece of red, yellow and orange leaves.

If you have started early in the morning, it is best to head down the mountain along the Hongryudong Stream near Haein Temple. This region is also known for its beautiful leaves. If you have started late, it is best to just turn back and go back down the path leading to Baekundong Information Center. That is because when there are more tourists, the hike takes longer. Gayasan National Park will close for a month starting Nov. 15 for forest fire prevention. For more, call (055) 930-8000.