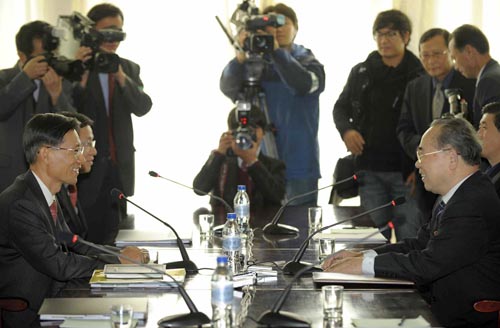 
During the second day of talks between North and South Korea regarding the future of family reunions, the North demanded 500,000 tons of rice and 300,000 tons of fertilizer in return for continuing the reunion of families separated by the Korea War. The current talks don’t affect the family reunions scheduled to begin this weekend.

South Korean Red Cross officials at the meeting in Kaesong, North Korea, told their North Korean counterparts that the organization did not have the power to approve such massive aid, a South Korean official said.

After requesting the normalization of tours to North Korea’s Mount Kumgang resort on the first day of talks two days ago, the North demanded aid yesterday.

“We answered back, saying that the Red Cross cannot produce the aid the North has demanded, and that this is an issue for the government to decide,” said a South Korean official involved in the talks.

The official also said that North Korea insisted that the issue of family reunions could be resolved if rice and fertilizer aid is provided.

“The North’s delegation did not change its position that [government-level] working talks should be held in order to solve the issue of [frozen assets at Mount Kumgang] in order to start regular family reunions.”

South Korea ended tours to the resort after a South Korean woman was shot and killed by a North Korean soldier there in 2008. The North seized the South’s assets and has said tours must resume before more family reunions.

The tours were a lucrative source of income for the North, bringing in as much as $30 million a year at its peak.

The South Korean delegation had offered to hold another round of Red Cross talks on Nov. 25, to continue discussing family reunions, confirm both sides’ relatives who have died since the Korean War and resolve POW issues, among others. There currently are 500 South Korean prisoners of war believed to still be in North Korea out of 100,000 who were believed captured and were never returned.

“We feel that the basic issues at hand such as the family reunions along with the humanitarian aid that North Korea has asked for could be discussed if there is another session of talks,” said the source. “During today’s meeting, we emphasized that the family reunions and Mount Kumgang tourism are two separate issues,” the official said.