Lee working the phones in support of the G-20

Lee working the phones in support of the G-20 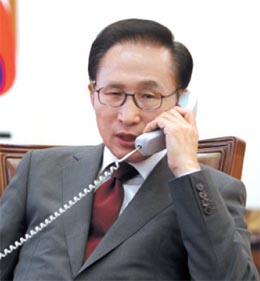 President Lee Myung-bak started making calls to world leaders yesterday to seek their cooperation in ensuring next month’s G-20 Summit in Seoul will be a success, the Blue House said.

During his phone conversations with the two leaders, Lee sought their support for Korea’s efforts to stop trade protectionism and to support initiatives to facilitate the sustainable growth of developing countries.

Kim said Lee will continue his telephone diplomacy to contact leaders he has been unable to have bilateral summits with before the upcoming G-20 Summit.

Lee had met some of the G-20 leaders on the sidelines of the recent Asia-Europe Meeting and he will meet with more leaders during his trip to Vietnam for a series of regional summits later this week.

“If South Africa pays special attention to creating an action plan that will last for years in the future, it will be beneficial to many African nations,” Lee was quoted as saying.

Lee met with Bhutan’s Prime Minister Jigme Thinley yesterday and told him that the G-20 Summit is an important meeting even for nations that are not members of the organization, Kim said.

Kim added that Thinley expressed his support for Lee’s efforts.