Korea is fourth in competitiveness

Korea is fourth in competitiveness 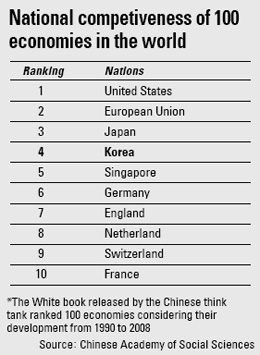 The Chinese Academy of Social Sciences has released a white paper about the national competitiveness of 100 economies and Korea ranked fourth. The United States took the top spot, followed by the European Union and Japan, China’s Xinhua News Agency reported yesterday.

Korea ranked 17th according to the institute’s white paper released in 2006.

The report released by the Chinese think tank, an affiliate of China’s State Council, evaluated the development of 100 countries from 1990 to 2008.

After the top four, the report listed Singapore, Germany, the U.K., the Netherlands, Switzerland and France.

The institute, however, didn’t give details on how it arrived at the evaluation of the competitiveness ranking of the countries it surveyed.

The institute said that China jumped to 17th place in 2008 from 73rd in 1990, noting that China will become a “G2,” referring to it being one of the world’s two superpowers, along with the United States, by 2050.

The Chinese Academy of Social Sciences, a research organization in the fields of philosophy and social sciences, was established in May 1977.