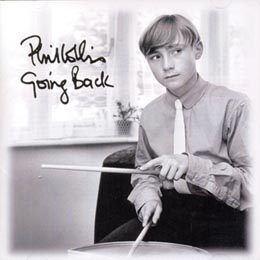 After two musically devastating health related issues, Phil Collins is back with a new album called “Going Back.”

He lost the hearing in his right ear in 2000 and had an operation to repair a dislocated vertebrae in his neck in 2009, which led many to believe that he wouldn’t be able to play the instrument that made his musical career - the drums. But that didn’t stop this genius from making a comeback.

In the album, Collins covers ’60s Motown songs. In an interview with a foreign newspaper, he said, “I want the songs to sound exactly like the originals.” To achieve that goal, the artist collaborated with renowned Motown greats, including members of The Funk Brothers.

His efforts show - the whole album gives off a warm feeling that is similar to the originals. The songs may not be all that familiar to Korean fans, but they will certainly recognize the particular styles of the time. With Collins’ talents, which have developed throughout his long musical career, fans are sure to appreciate the revival of this soulful dance music. The song “Papa Was a Rolling Stone,” originally sung by The Temptations in 1971, plays with blues and soft electric guitar sounds in the style popular at the time. The album is sure evidence that legends are legends for a reason. They don’t quickly fade away.