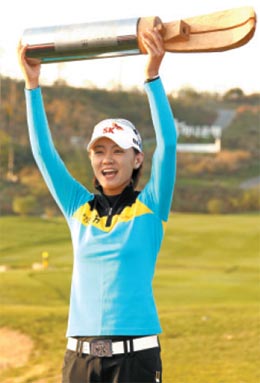 INCHEON - Choi Na-yeon won her second straight LPGA Hana Bank Championship title on Sunday on home soil and shot to the top of the money list on the world’s premier female golf tour.

At the Sky 72 Golf Club, west of Seoul, Choi shot a final round of three-under 69 to finish at 10-under for the tournament, the only LPGA event in South Korea. American golfer Vicky Hurst was the runner-up at eight-under.

Choi began the final round one shot behind her close friend Kim Song-hee, who suffered a back-nine meltdown to shoot 73 and end in third place at seven-under.

Choi earned $270,000 with the victory, the fourth of her LPGA career, and skipped past her compatriot Shin Ji-yai to claim the No. 1 spot on the LPGA Tour money list.

Choi had been about $50,000 behind Shin during the season at about $1.47 million. Shin ended in a tie for fourth at six-under.

Choi is also the first golfer to put up back-to-back wins at this championship, which began in 2002. Koreans have been dominant at the Hana Bank Championship, winning seven of the nine events.

Choi birdied the 10th hole to reach 10-under, and took the lead for the first time Sunday when Kim bogeyed the same hole to slip to nine-under.

Kim got one shot back with a birdie on the 15th but lost one on the very next hole.

She was seeking her first LPGA win, but settled for her 16th top-10 finish out of 20 tournaments this year. Kim started the day with a birdie but committed four bogeys on the back nine.

Koreans have won eight times on the LPGA Tour this year. The tour moves to Japan next week to wrap up its annual Asian swing.