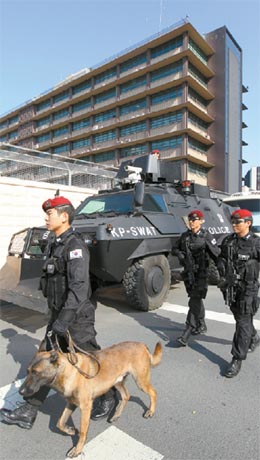 A police SWAT team patrols the perimeter of the U.S. Embassy yesterday as the Seoul Metropolitan Police Agency beefed up security around major facilities before the G-20 Summit scheduled for Nov. 11 and 12. [YONHAP]

With the Group of 20 Summit approaching in 10 days, President Lee Myung-bak began making last minute efforts to prepare for the largest diplomatic event in the nation’s history.

In his biweekly speech, Lee said Korea would be the first Asian nation to host the forum, which has only been held in advanced countries.

“We have opened a new path for an emerging economy to host the G-20, and it is a significant change in the global order, taking into account the role and importance of the G-20 Summit,” Lee said.

While hailing the achievements made at the G-20 finance ministers’ meeting in Gyeongju last month, Lee said the Seoul summit will be an important chance to implement the agreements reached there and strike a deal on pending global financial issues.

“Hosting the summit will bring about 30 trillion won [$27 billion] of economic benefits,” Lee said in the speech. “The publicity effect is four times more than hosting the World Cup games. But what’s more important is the national pride, because our people’s blood and sweat have made this achievement.” 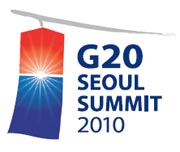 According to Blue House officials, Lee is spending most of his time preparing for the summit. “Unlike other international summits, the G-20 is a serious discussion session where you must have deep knowledge of what other participants are talking about,” said Presidential Chief of Staff Yim Tae-hee. “Furthermore, the president will host the meeting. Unless you are fully prepared, it is impossible to bring about the desired outcome.”

The press event will be held at Chunchugwan, the Blue House’s press compound. During the 50-minute session, to be broadcast live starting at 10 a.m., Lee is expected to address the summit’s agenda as well as other topics including the Korea-EU and Korea-U.S. free trade agreements and inter-Korean issues.

According to the Blue House, Lee will also keep up his telephone diplomacy with G-20 leaders to seek their support for the summit.

“In addition to Lee’s preparation for the summit, we are stepping up our monitoring of security measures as well as publicity efforts,” Hong said. “It’s perhaps no exaggeration to say that the administration will enter the G-20 emergency preparation stage.”