Veteran center all smiles with ET Land tied for 1st

Veteran center all smiles with ET Land tied for 1st 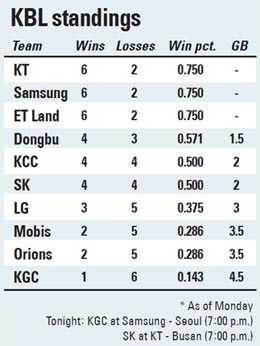 Veteran center Seo Jang-hoon of the ET Land Elephants is all smiles these days.

In stark contrast to the woeful start of last season in which the Elephants lost 13 consecutive games, ET Land is tied for first with a 6-2 record. ET Land is already being tabbed as one of the legitimate contenders in the 2010 KBL season.

“There’s nothing particularly special about this team,” Seo said. “We added some players to shore up our roster. In contrast, there are several teams who are missing their key players because of the 2010 Asian Games.”

ET Land - without a single national team player on its roster - has won four of its last five games, while Dongbu and Mobis have struggled without their star players Kim Joo-sung and Yang Dong-geun, respectively.

Despite Seo’s modesty, ET Land has undergone a drastic change since last season, not merely in the win column but in the manner in which they play their games. Last season, there were many instances where the Elephants failed to hold onto the lead, losing games in the final stretch of the fourth quarter. Things have been drastically different this season. They have shown the ability to come back from a deficit and to hold onto the lead with strong defense down the stretch. Seo and his teammates have lost two games so far and both games were determined by five points or less.

“Last year, when the opposing defense focused on stopping me, there wasn’t much else we could do,” said Seo. “With the addition of Moon Tae-jong and Herbert Hill, we can create mismatches on offense.”

Seo scored a season high 30 points in an 87-85 win over the LG Sakers on Sunday. Moon also had a monster game, scoring 37 points, while Hill added eight.

Moon - who possesses a lethal jump shot - is averaging 20.3 points, 5.6 rebounds and 2.6 assists per game in his rookie season in the KBL. Hill, who played at Providence University at the collegiate level, is currently averaging 16.4 points and 7.8 rebounds after playing a key role on the Daegu Orions offense last year.

But it’s been Seo who has really led his team. The 36-year-old center is one of the best all-time at his position in the KBL and has a career average of 20.2 points and 8.1 rebounds per game. He also earned the distinction of becoming the first player in KBL history to reach 10,000 points in November 2008.

Seo came to ET Land in a midseason trade from the KCC Egis during the 2008-09 season. Seo and the Elephants finished ninth in the league and missed the playoffs last year. Coming off a season in which he averaged 17.1 points and 6.6 rebounds, Seo agreed to salary decrease of 120 million won ($107,400) this season to spare his club room on the salary cap.