Burnt out bulbs to bulgogi,‘errand men’ at your service

Burnt out bulbs to bulgogi,‘errand men’ at your service 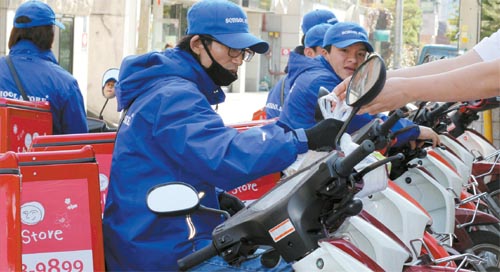 School Store servicemen get ready to deliver food to a customer.


Oh Young-sun was in a bind: She had a business meeting in an hour and her 12-year-old son desperately needed her to bring him his tracksuit for gym class. But instead of canceling the meeting, Oh called a 24-hour errand-running service to have the tracksuit delivered to her son’s school.

“Right when my son called asking me to bring something to school that he had forgotten, I was stepping out of the house for a meeting. I had the Anyman serviceman deliver the tracksuit right to his classroom, so I could make my appointment,” said Oh.

Errand-running services such as Anyman are seeing a boom in popularity in Seoul, especially in the city’s wealthy southern districts. The businesses take calls around the clock and will run any sort of errand imaginable.

Are you too lazy to get off the couch to get some smokes or chips from the convenience store? Anyman can get them to you in a jiffy.

Their “errand men” even change light bulbs and kill spiders.

“We do everything, except anything illegal,” said Yoon Joo-youel, CEO of Na Community, the mother company of Anyman.

For today’s on-the-go Seoulites who are too busy to wait in a restaurant for food, Anyman’s errand-runners will wait in their place and deliver the food anywhere in the city.

“The requests we get are basically the things anyone can do. But people are just too busy to take care of all these things by themselves, so they come to us. It’s more like a time saving exercise,” said Yoon. Many of the services offered deal with everyday routines such as cooking and cleaning. Occasionally, it has nothing to do with running an errand at all, such as waking people up in the morning - except Anyman won’t give up until you get out of bed (which can sometimes take over half an hour).


Creativity is often required to deal with the wide range of requests people call in with.

“Some people have asked us to pick up toilet paper as they wait sitting on the toilet,” said Yoon.

Others have requested someone to go to a wedding in their place, asking them to drop off a cash-stuffed envelope and even sign the guest book on their behalf. One man called in to ask for a girl to pose as his girlfriend when his parents were in town.

But there are limits. “People know what’s possible and what’s not possible. When asking for a service, customers never ask for anything that they themselves can’t do or get,” said Yoon.

Last month’s major cultural and sporting events like the Pusan International Film Festival and the Korean Series meant more customer requests to stand in line for tickets. “Since it takes time to wait in line for tickets, people would rather pay someone else to do it for them,” said Yoon.

Daesin Man, another errand-running service, has also had its share of oddball requests.

“One of our regulars asked us to go to her favorite Korean barbecue place, grill the meat and bring it back to her home,” said Ju Jin-young of Daesin Man.

According to figures from Anyman, the country’s chauffeur industry has grown to 3 trillion won ($2.6 billion) per year and the errand-service industry has the potential to grow to 30 trillion won per year. Already there are more than 200 businesses nationwide competing to run people’s errands. But partly because of low start-up costs and the resulting flood of new ventures, the business failure rate for the industry is high.

One customer, who asked to be referred only as Lee, said after his favorite errand company shut down, another quickly sprang up to take its place. “The company I used before suddenly closed down, but I found another one that does similar work, and I keep using the service,” he said.

Experts say the industry has much potential because of the high return-customer ratio - 70 percent. First-time customers, they say, end up using the service regularly and some become once-a-day customers.

School Store targets people who don’t have time to cook at home, but still want a home-cooked meal. Its concept is offering meals-on-request and delivering them to the dining room table. “We wanted to start a business where similar businesses had already seen success,” said Kang Joon-won, its executive director.

He added that he thinks business is booming because people who live in Gangnam District tend to be more open to trying and accepting new trends, which is why he says many of the errand-running services are based in Gangnam.

“I had such bad cramps one night and needed a 24-hour pharmacy. I wasn’t able to go outside because of the pain. So I called Anyman and asked them to get me painkillers,” said Oh. “I think this service has promise. Since I use it pretty often, my family and friends know that I’m a loyal customer. I’m always singing the praises of these businesses.”

Other quirky requests were for celebrity autographs. “We went to Lee Min-ho’s fan club meeting twice and another customer asked us to go get a signature of Kim Hyun-joong,” said Yoon. Both were stars in “Boys over Flowers.”

There have been some touching requests as well, such as the time when a disabled mother called Daesin Man to ask for someone to run with her son in the mother-son school marathon.

As a first-mover in the industry, Anyman is trying to scoop up as much market share it can from the get-go. It has established a nationwide phone number, and it now has 15 branches across the country including in Busan, Wonju, Cheonan and Daegu. Anyman’s CEO says their nationwide service network will be complete within three years. Bigger ambitions include expanding their service to China and Japan, where they will begin marketing on major Internet portals as early as next year.

So how much does it cost to have someone come to your house and rearrange your living room? It depends on two factors: Companies first take into consideration how much time and energy it would take to complete the request.

Rearranging a living room would cost around 30,000 won per hour because it is more physical. Waiting in line to get concert or sports tickets costs only 15,000 won, since it requires little physical labor.

The second factor considered when calculating the cost is the distance covered to run the errand. Asking Anyman to pick up food at your favorite restaurant in Jamsil, Seoul, and bring it back to Sinchon is more expensive than having cigarettes delivered because of the long distance and the length of time needed to complete the request.

Errand services have proven to be in high demand among foreign business people in Korea. Some have requested a short-term translator or a secretary.

Foreign researchers have asked for Korean administrative specialists to help find and fill out documents.

Another popular request for foreigners in Seoul is food delivery. Russian, Greek, Indian, Iranian - almost anything you can crave is available in Seoul. But for the subway-averse, they’re out of reach. The errand service will help find a restaurant in the city and deliver the meal to a hotel or home.

“FedEx also started from delivering small goods, but it has become a world-renowned company. We will be more and more a part of people’s everyday lives from now on,” said Anyman’s CEO.