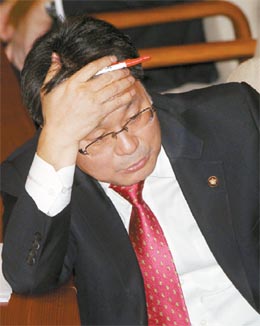 The Democratic Party’s Kang Gi-jung consults with Chung Sye-kyun, former chairman of the DP, yesterday at the National Assembly. By Ahn Seong-sik

“It should no longer be tolerated for a lawmaker to make irresponsible remarks to achieve a political goal by abusing his privilege of exemption from liability for what he says in the National Assembly,” Lee was quoted as saying by his spokeswoman Kim Hee-jung during a cabinet meeting yesterday morning.

“To stop such practice, the National Assembly must come up with a necessary measure,” Lee said. “During the military dictatorship, freedom of speech was not allowed due to political oppression. But we are living in a democratized era now, and such an abuse of legislators’ immunity will only hurt the people. The lawmakers must voluntarily come up with a preventive measure.”

According to law, legislators are immune from arrest during their terms and can’t be sued for any statements made in the National Assembly.

During an assembly session Monday, Kang alleged that the first lady was linked to an influence-peddling scandal involving Nam Sang-tae, CEO of Daewoo Shipbuilding & Maritime Engineering.

The Democrats have alleged that Nam used slush funds to bribe top officials to keep his job at the nation’s second-largest shipbuilder. Daewoo Shipbuilding’s leading shareholder is the state-owned Korea Development Bank. Nam was appointed president in March 2006 under the Roh Moo-hyun administration. He was reappointed to the post in March 2009, fueling rumors about his alleged lobbying.

During a questioning of Justice Minister Lee Kwi-nam on Monday, Representative Kang urged an investigation of the first lady.

Kang said that “a bunch of $1,000 American Express checks were provided to the first lady and Hwang during the influence-peddling process.”

Kang also claimed that the prosecution’s latest investigation into President Lee’s close friend Chun Shin-il was a conspiracy to cover up the first lady’s involvement.

After Kang’s remarks, Justice Minister Lee said he had not heard such allegations, adding that “the prosecution does not investigate rumors.”

The Blue House and the Grand National Party denied the accusation. The ruling party yesterday filed a petition against Kang with the National Assembly’s Special Committee on Ethics, asking for a severe punishment.

“We will hold Kang accountable for his crude remarks,” Kim Moo-sung, the GNP floor leader, said. “The National Assembly must also find a way to prevent any more abuse of lawmakers’ immunity.”

The Grand National Party also demanded that Kang issue an official apology and that the Democratic Party promise to stop such defamations.

“Not a single detail about the relationships depicted in Kang’s story agrees with the truth,” Kim Hee-jung, the presidential spokeswoman, said Monday shortly after Kang’s remarks at the legislature. “What a fiction it is! If he were not a lawmaker, he would have already been arrested.”

Chung Jin-suk, the president’s senior secretary for political affairs, said Kang’s accusations were “not even worth talking about,” adding that the Blue House will take all necessary legal measures against Kang.

Kang, a two-term lawmaker whose career in national politics began in 2004, represents Buk A electoral district of Gwangju. He dubs himself a “fighting cockerel” and has led campaigns against the ruling party.

The Democratic Party appeared to have no intention of backing down. During a party meeting yesterday morning, Park Jie-won, the DP’s floor leader, defended Kang.

“Kang’s question was a repeat of suspicions about the first lady that were previously raised by opposition parties,” Park said. “The Blue House and the government never provided an answer. The Blue House should investigate and make public the outcome when an opposition lawmaker raises a question.”