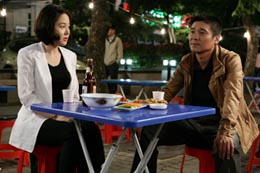 Comedic actor Lim Chang-jung (“Sex is Zero,” 2002, and “Sexy Bosal,” 2009) pairs up with Uhm Ji-won, who is known as the queen of melodrama. Lim plays Bang Geuk-hyun, a man who never pays his credit card bills and always finds a way to elude his creditors. Uhm, who is typically cast as a sophisticated leading lady, has transformed herself into a feisty credit card debt collector named Kim Mu-ryoung, who is out to get Lim once and for all.

The film starts with Lim getting repeated calls about his overdue credit card bills from Kim. What Bang doesn’t know is that Kim is known for her ability to strike fear into delinquent customers. After a never-ending dispute by phone, both parties hang up furiously. Later, the two meet unexpectedly when Bang finds Kim’s wallet and tries to return it to her. When they recognize each other, the fun begins. 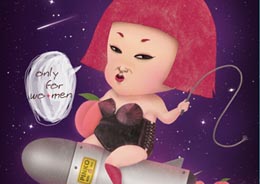 The Pink Film Festival is celebrating its 5th anniversary this month with a series of screenings.

“Pink film” is a style of Japanese softcore pornographic film that began in the early 1960s.

At the festival, directors are asked to produce a 60-minute, low budget film in three to five days. Although the films revolve around sex, the festival itself was launched to facilitate a broader dialogue about sex and sexual freedom for women.

Pink Masterpieces deals with films from the 1960s and 70s, when sex was a taboo topic but shown on film. Soft Pink includes films about women who use men as sexual objects and Well-made Pink features films that crossed over from pornography to feature films.

Most of the screenings are for women only, but select films will be open to women and their boyfriends.

“Red” director Robert Schwentke must have had a smile on his face knowing he’d get superstars Bruce Willis, Helen Mirren, Morgan Freeman and John Malkovich to play the lead characters in Warren Ellis and Cully Hamner’s graphic novels of the same name.

The four actors play aging former-CIA agents who knows a little too much about the goings on at the CIA. Now they’re on the run from the very agency they used to work for. On the way they begin to uncover a major government secret that takes them to the very doors of their old employer. There are well-filmed action sequences and plenty of comedy - thanks to the infectious chemistry among the actors - despite the story being a bit standard fare for an action film.

Red is clearly meant to be pleasing, not exactly thought provoking. Similar to “The Expendables” a few months ago: drop some aging stars in an over-the-top flick, let them have fun and enjoy the show. 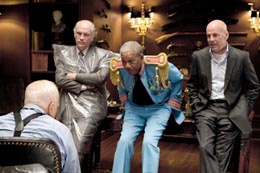 Based on the 1976 Tangshan earthquake, which is believed to be the largest earthquake of the 20th century, the movie tells the heartrending story of a mother and daughter separated by disaster.

Li Ni (Fan Xu), the mother of a twin girl and boy who are buried in debris, is forced to make a horrible choice to save either her daughter or her son. She decides to save her son. Miraculously, her daughter, Fang Deng, manages to survive and is adopted by a young couple. But she continues to suffer the painful consequences of her mother’s decision. When disaster strikes Sichaun 32 years later, Fang Deng (Jingchu Zhang) goes back to help the survivors. She also reunites with her mother and brother, unlocking the mysteries of her past.