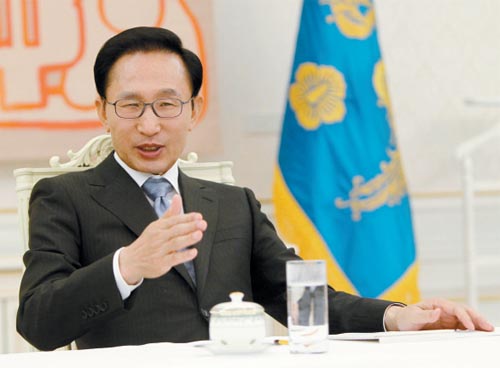 President Lee Myung-bak talks to reporters at a special joint interview on Saturday at the Blue House. By Cho Mun-gyu


While the Group of 20 accomplished a lot to overcome the global financial crisis, the next step - precise targets for current-account balances - won’t be quick or easy, said President Lee Myung-bak in a joint interview on the eve of the G-20 Summit in Seoul Saturday at the Blue House.

Leaders of developed and emerging economies, as well as heads of key international organizations, will gather in Seoul for the two-day G-20 Summit on Thursday and Friday. While their financial ministers reached a landmark agreement in Gyeongju last month to avoid competitive currency devaluations and curb excessive trade imbalances to stop a global currency war, they were not able to define “indicative guidelines” to rein in current account imbalances. Expectations are high that such guidelines will be agreed to at the G-20 Summit.

“I think it is a tremendous success that the G-20 members agreed [during the Gyeongju meeting] on the principles of using indicative guidelines,” said Lee. “But it was impossible to define the specifics of the guidelines during such a short period as between the Gyeongju meeting and the Seoul summit. We are forming a working group now, and it will take months for us to complete the work, at least.”

“The Seoul summit should be seen as a great success if the leaders can agree on the principles on how to define the standard,” Lee said. “I believe we will have a very enthusiastic discussion on this issue at the summit.”

Calling the G-20 the most realistic way of getting past the global financial and economic emergencies as well as the latest currency disputes, Lee said the forum’s role will continue beyond the crisis. But that will depend on the G-20 nations reaching out to poorer countries, he said.

“What we must never forget is there are 170 nonmember countries,” Lee said. “For the G-20 to have legitimacy, outreach programs with the nonmembers are crucial to reflect their opinions. Korea’s proposal of a development agenda for the summit is a part of such efforts.”

Lee, who has long urged the world to fight trade protectionism, was sanguine about the last-minute negotiations between Seoul and Washington to settle outstanding issues in a bilateral free trade agreement.

“The sooner the better to conclude the Korea-U.S. FTA,” Lee said. “From the U.S. perspective the deal is very positive, because more jobs will be created.”

Referring to a recent telephone conversation with U.S. President Barack Obama, Lee said, “We had promised the best efforts to conclude the deal during the upcoming summit. Working-level talks are ongoing, and I believe it is possible [to keep the promise].”

Lee said the FTA will send a message to the world that Washington eschews protectionism, while also bolstering the U.S.-Korea alliance.

Regarding inter-Korean relations, Lee stressed the importance of Pyongyang apologizing for the March sinking of the South Korean warship Cheonan. “To resume the six-party [denuclearization] talks, the North’s sincerity to give up its nuclear arms program is a precondition, but in terms of inter-Korean issues, the Cheonan’s sinking is a grave matter because it was an incident in which the North took South Korean lives,” he said. Seoul accuses North Korea of sinking the Cheonan with a torpedo, a charge Pyongyang denies.

He said South Korea is another great example that the North should emulate. “We are a good model, and China is a good model. How the North will develop itself is completely up to the North,” Lee said. “When the North becomes a member of the international community, it will receive assistance.

There is a global trend of supporting developing economies’ growth, so I believe the North must join the international community as soon as possible.”

Lee said he also appreciated Chinese President Hu Jintao’s efforts to share China’s experiences with the North. “I believe it is another form of supporting the North for Beijing to exercise its influence to make the North emulate the Chinese model,” Lee said.

Asked if an inter-Korean summit will be possible during his presidency, Lee repeated his stance that he will not meet North Korean leader Kim Jong-il for a mere photo opportunity. “Just to hold a summit for its own sake is not the ultimate purpose,” he said. “Instead, it should serve as a means to resolve important inter-Korean issues. To this end, it is necessary for the North to be prepared mentally. The key to holding another summit is the North’s determination to completely dismantle its nuclear programs and its responsible attitude concerning the attack on the South Korean corvette.”

Lee also said state leaders of the six-party members (except for the North) will meet at the G-20 and APEC summits this week and share their opinions on the issue. Separate bilateral meetings with leaders of China, Japan, Russia and the United States are scheduled throughout this week.

“Our consensus now is that we will not participate in talks that will only allow the North to buy more time,” Lee said. “We will only resume talks when the North shows its true willingness to give up nuclear arms. North Korea must know that it will not be able to achieve anything without the South’s consensus. The time has come now for the North to give a clear-cut answer.”