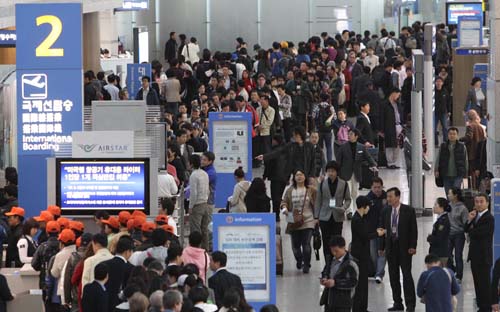 Incheon International Airport is crowded with passengers waiting for inspection yesterday. Ahead of the G-20, the Ministry of Land, Transport and Maritime Affairs raised its alert to “red” at five airports in Korea. By Kim Hyung-soo

Seoul police raised their security alert to its highest level to guard against acts of terrorism or violent demonstrations during the G-20 Summit. It has also cracked down on remote controlled airplanes and helium balloons, which could be used to deliver bombs.

Security across the country and at five international airports has been raised to “red,” the highest level.

According to police, about 30 antiglobalization protestors entered Korea prior to Monday, and they say there’s a strong possibility they will protest against symbols of globalization, such as McDonald’s. But police said demonstrations will be permitted only in an authorized zone.

“We have a plan to designate the Bosingak Pavilion, central Seoul, as a ‘Peace Zone’ [where protestors are allowed to have demonstrations],” police said.

To guard against remotely delivered bombs, police have focused on helium balloons, which Korean activists commonly use to send leaflets and other propaganda across the DMZ into North Korea.

“The balloons can carry not only leaflets but other hazardous materials as well,” police said. “We are really concerned because it is not difficult to make those balloons.”

According to police, a 12-meter-long balloon filled with hydrogen or helium can carry a load of 10 kilograms (22 pounds).

Police said they will monitor 14 helium and 20 hydrogen gas stations in Seoul and Gyeonggi.

They are also worried about remote controlled model airplanes, and police are planning to jam the frequencies used to control them near COEX, where the G-20 will be. Police said they have asked model plane clubs and stores to prohibit people from flying model planes during the G-20.

The fuel that powers the model planes, nitromethane, is also a concern. To buy more than 20 liters of the fuel requires authorization.

“Bombs made with nitromethane were used in the KAL explosion in 1987 and an airline bomb in London in 2006,” police said.

Yesterday the police arrested two distributors in Yongsan District and Guro District who sold a total of 1,800 liters of nitromethane without authorization.

At the airport, police said they planned to physically frisk half of all outgoing passenger and inspect 50 percent of the bags visitors carry.

“Due to stricter security inspection, it will take more time for passengers to board airplanes,” said Jeong Pil-man, an official at the Ministry of Land, Transport and Maritime Affairs. “We ask passengers on international flights to arrive at the airport an hour earlier than usual.”