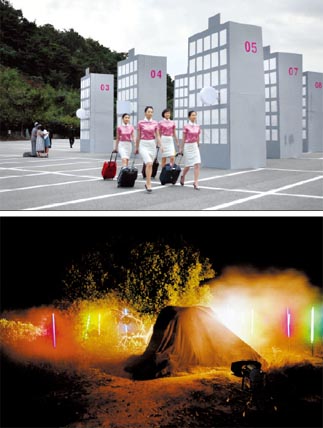 A scene from the 15-minute short “Seoul Fiction” by Jum Yang (top) and Thai director Apichatpong Weerasethakul’s “Unknown Forces” (above). Provided by Artsonje

In a dimly-lit corner inside Artsonje Center in northern Seoul, an unknown object covered in a black cloak dances along with neon-colored lights and the beat of disco music playing in the background. On the opposite end of the room, a video showing a drunken man letting loose on top of a truck stands diagonally across from two other video images of a man and a woman, each riding in a pick-up truck and talking continuously in Thai.

The friction in image and sound created through these conflicting video images is Thai director Apichatpong Weerasethakul’s take on the current socio-political tensions in his homeland and the perilous repercussions for his people. Through his 4-channel video projection, “Unknown Forces,” Weerasethakul - this year’s Palme d’Or recipient at the Cannes Film Festival - presents his observations through a surrealistic work that feels like something between a video installation and an experimental movie.

Weerasethakul’s work is part of the “Projected Image” exhibition, the final installment in the five-part project “Platform,” under the direction of Kim Sun-jung, an art professor at Korea National University of Arts. Platform began in 2006 with the goal of providing an experimental stage for contemporary art. In this final exhibition, the realms of film and visual art converge.

“We tried to look at contemporary visual art in this exhibition by showing video art as though it were a movie in a theater, as well as showcasing films by world-renowned directors in a gallery, as if they were video installations,” Kim said during a press conference last week.

Featured are a total of 87 moving image works by 66 artists from Korea and abroad, including Weerasethakul, Lawrence Weiner, Nam June Paik, Len Lye and Kimsooja.

The project directors say that as early as the 1960s and 1970s, visual artists started using video and experimental filmmakers, including Michael Snow and Paul Sharits, created works that extended into the gallery.

Fifteen short films by the late Len Lye, the New Zealand-born artist considered one of the pioneers of experimental film, are being screened, including “Color Cry,” “Color Flight” and “Particles in Space.” Perhaps most recognized for incorporating motion in art and making films by manipulating the celluloid, Lye has also worked in painting, poetry and photography.

“In many of his works, he painted directly on celluloid using stencils, combs and then printed that as a color film,” said Tyler Cann, curator of the Len Lye Collection and Archive at the Govett-Brewster Art Gallery in New Zealand.

For example, in Color Cry, a short film made in 1952, the artist plays with the boundaries of visual art and film by employing the rayogram technique, in which photo-like images are made without a camera and objects are placed directly onto the surface of a photo-sensitive material.