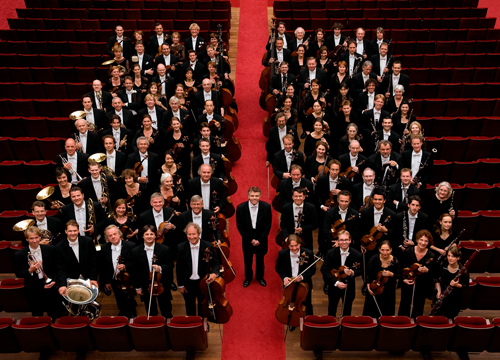 The Royal Concertogebouw Orchestra, recognized as one of the world’s best orchestras, will hold its first concert in Seoul in 14 years at the Seoul Arts Center on Friday and Saturday. Maestro Mariss Jansons conducts. See MUSIC, left. Provided by Kumho Cultural Foundation

Conductor Marco Zambelli leads the Gangnam Symphony Orchestra and a group of soloists.

Friday: Two years ago, a group of top critics in Britain’s Gramophone magazine ranked the Royal Concertgebouw Orchestra of Amsterdam as the world’s top orchestra. In its first concert in Seoul in 14 years, the orchestra, led by maestro Mariss Jansons, will perform Janacek’s “Taaras Bulba” and Tchaikovsky’s Symphony No. 4 in F minor, Op. 36.

The concerts start at 8 p.m. on both days.

Saturday: World-renowned classical guitarist David Russell is back in Korea after four years.

The program starts with a piece by French composer Francis Kleynjans. Russell will also perform his own arrangements of pieces by Fernando Sor, Louis Couperin and Johann Sebastian Bach.

Russell began playing the guitar at the age of 16 at London’s Royal Academy of Music and earned the title of most respected graduate.

Saturday: This Danish alternative rock band has recently gained fame in the United States and around Europe for their unique sound and the high-pitched voice of lead singer Jonas Bjerre. Expect to hear songs from their latest albums “And the Glass Handed Kites” (2005) and “No More Stories...” (2009).

He is joined by renowned Korean soprano Kang Hye-jung.

Carreras was a member of The Three Tenors along with Placido Domingo and Luciano Pavarotti.

His first performance in Korea was in 1979.

Nov. 20: Danish musician Annekei is famous for a style fusing jazz, pop, folk and R&B. She released her self-titled debut album in 2006 and won Best New Foreign Artist from Japanese jazz music magazine Adlib the same year. Opening the show will be Takashi Masuzaki, the guitarist for the Japanese jazz band Dimension.

Performances start at 8 p.m. on Friday and at 5 p.m. on Saturday.

To Sunday: SPAF 2010 will feature a variety of breathtaking performances, including plays, dances and multimedia work by 28 groups from Russia, France, Switzerland, Belgium, Poland, Lithuania, Bulgaria and Korea.

Admission is free, but tickets must be reserved on the theater’s home page. There are only 200 seats available and they will be distributed on a first-come, first-served basis.

Friday: In honor of the G-20 Summit, the National Changgeuk Company of Korea presents “Cheong,” a changgeuk (traditional Korean opera) work that originates from “Simcheongga,” one of the five surviving stories in the pansori tradition. The performance will be presented on a 16-meter (52.5 feet) rotating stage, and the music will be performed by more than 40 members of The National Orchestra of Korea.

Although the performance is for foreign diplomats, 100 general admission tickets will be sold on a first-come, first-served basis for between 10,000 and 50,000 won.

Today to Sunday: This is a festival for bird lovers. Activities include cultural events and exhibitions, field trips to observe migratory birds and films about birds. Guided bus tours will also be available.

The observatory (known as Tamjohoerang in Korean) is a corridor built on the embankment of the Geum River, and is the only park of its kind in Korea. Children can also learn about ecology at Napo Cross Fields, near the park.

From Seoul, take a train to Gunsan Station.

To Nov. 17: This showcase is focused on new media art. The 45 participating artist groups from 21 countries include famous names like British-American artist Sarah Morris. Among the Korean artists involved are Noh Sun-tag and Yangachi.