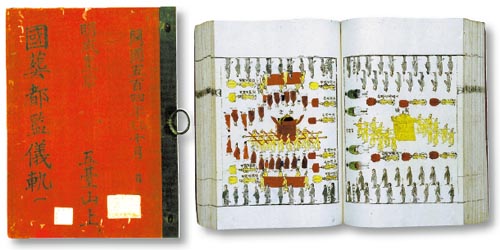 A photograph of a Uigwe volume depicts the funeral of Empress Myeongseong. The ancient Korean royal texts will be returned to Korea. By Kim Hyun-ki


Japan’s agreement on Monday to return 1,205 books taken during its colonial rule over Korea was welcomed by the government, but some local scholars said that there are plenty of purloined artifacts not on the list. They say the agreement should be the start of efforts to repatriate cultural assets remaining in Japan.

Several books of historical value that scholars expected to be returned were absent from the list, including the Jesil books and the Gyeongyeon.

The Jesil books, designated as tangible cultural properties by the government, are records of medicine, customs and military systems during the Joseon Dynasty (1392-1910). The Gyeongyeon are educational books for the Joseon kings.

An official at the Ministry of Foreign Affairs and Trade explained yesterday that the promise made in August by Japanese Prime Minister Naoto Kan to return Korean cultural assets only referred to items taken by the Joseon Governor General’s Office during the 1910-1945 colonial rule, which have since been kept by Japan’s Imperial Household Agency in Tokyo.

The Jesil Books are not included, the official said, because it’s not clear how they were taken to Japan. The Gyeongyeon was excluded because it was taken before the colonial rule.

“The Gyeongyeon books, known to have been taken by Japan during the Imjin War (1592-1598), are relatively important documents,” said Kim Mun-sik, a historian at Dankook University. “Except for the Uigwe, it seems that books of academic value are not being returned this time.”

According to the ministry, the 1,205 books Japan agreed to return include 167 volumes of royal protocol called the Uigwe, as well as one volume of the Daejeonhoetong, 99 volumes of the Jeungbomunheonbigo and 938 books taken from the Joseon royal library called the Gyujanggak.

The Daejeonhoetong is the final written legal code during the Joseon era. It was written by Jo Du-sun, the equivalent of a prime minister to King Gojong, in 1865. It is considered to have laid the framework for modernizing the legal system.

The Jeungbomunheonbigo is an encyclopedia chronicling politics, economics, religion, art and law from the early period of the Korean Peninsula to the late Joseon era. Scholars regard it as valuable to study Korea’s past social systems. It was published in 1908.

The ministry did not give details about the Gyujanggak books.

The Uigwe, a collection of documents on Joseon royal customs, is assessed to be historically valuable, but Dankook’s Kim said Korea already has copies of the Uigwe.

Jang Gyeong-hi, professor at Hanseo University, said there are still many items that Japan took unofficially, so the two countries need to do joint research on the looted cultural heritage items. According to the National Research Institute of Cultural Heritage, 61,409 cultural assets taken from Korea are exhibited at around 250 museums, colleges and temples in Japan.

Some, however, were more positive about Monday’s agreement, including the Ven. Hyemun, a Buddhist monk who led a civic campaign to get the Korean cultural heritage items from Japan.

“If we remind ourselves that straw sandals and unofficial seals were included among the returned items under the 1965 treaty, we will have to pay attention to the value, not quantity [of the items returned],” Hyemun said.

Japan returned around 1,300 items based on the 1965 treaty, and said the entire issue of looted artifacts was settled.