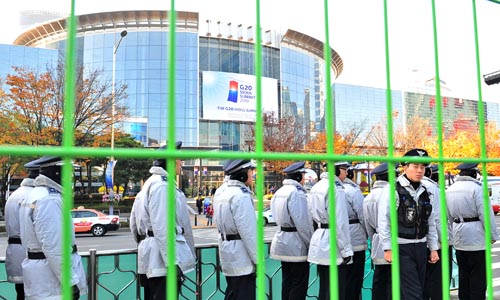 Police patrol a fence surrounding COEX, the venue for the G-20 Summit in eastern Seoul, yesterday, to prevent violent demonstrations or acts of terrorism. [NEWSIS]


An alliance of 84 liberal civic and labor groups will hold a rally in downtown Seoul today, according to police. The alliance, called “Put People First! Korean People’s G-20 Response Action,” is also planning a street march.

The group said it will begin the rally near Seoul Station at noon, with an estimated 10,000 participants. Police, however, expect about 3,500 people to participate.

About 100 foreign activists are expected to join the event.

The police said it allowed the alliance to hold a demonstration at the station and hold a street march to a three-way intersection near Namyeong Station. The alliance was also permitted to use three lanes of road on Hangang-ro, the main thoroughfare through Yongsan District, for the march. Police expect that the march will start at 5:30 p.m. at Seoul Station and end at 6:30 p.m. near the Namyeong intersection.

Because the march will take place in the vicinity of the National Museum of Korea, where the G-20 leaders will gather for a welcome reception and working dinner, the police will build barricades to contain the rally’s flow. Twenty-seven units of riot police, armed with water cannons, will be dispatched to the site in case of an emergency. The group, however, said the rally and street march will be peaceful. “After finishing the march, we will disperse voluntarily,” an alliance official said.

Various protective walls and fences were erected around the main summit venue at COEX, southern Seoul, to prevent major demonstrations or terrorist activities in the area. Fences 2.2 meters high were built today in a 600-meter radius (about 0.4 miles) around COEX. Police said they initially planned to build the walls three days ago, but later police delayed the wall construction as they estimated that fewer demonstrators than expected will be at COEX today.