The G-20 countries yesterday failed to make progress on resolving currency disputes and establishing current account limits on the eve of the G-20 Summit that begins today.

Despite an agreement on strengthening global financial regulation, the absence of a solution on the currency issue threatens the summit’s goal of achieving a consensus on balanced global economic growth. Vice finance ministers and other officials from the G-20 countries have been meeting to draw up final proposals to be discussed by the G-20 leaders and included in the “Seoul Declaration” joint communique that will released Friday.

But officials from the G-20 Organizing Committee acknowledged that differences remained on the currency issue after the recent second round of quantitative easing by the U.S., along with Washington’s proposal to set guidelines for limits on current account surpluses and deficits. 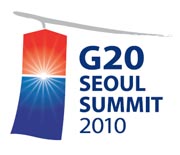 China and Germany, which both have large current account surpluses, have raised objections to the U.S. proposal, which may not be included in the final communique unless a last-minute compromise is reached.

However, the G-20 officials confirmed the outcome of last month’s meeting of G-20 finance ministers in Gyeongju, which included agreements on ending competitive currency devaluations based on market mechanisms and reforming the International Monetary Fund.

Agreements have also been reached on Korea’s initiative to create global financial safety nets and to establish an agenda on closing the development gap between rich and poor countries. “The discussions on other issues are going smoothly and they are practically concluded,” said a Korean government official. Seoul believes that around 80 percent of the agenda goals it set for the G-20 Summit have been achieved.

Analysts suggest that a face-saving compromise on the current account issue could still be concluded, with the G-20 leaders establishing a schedule for the presenting of guidelines that would be used by the IMF to set limits on excessive current account surpluses and deficits. This means that the issue will likely to be discussed further at the next G-20 Summit in France in 2011.

The U.S. had initially sought to limit current account surpluses and deficits to 4 percent of a nation’s gross domestic product.

But the U.S. has come under fire for conducting a second record of quantitative easing, which has been criticized by other countries for creating the conditions for asset bubbles in rapidly growing emerging economies. Washington has also been accused of weakening the recent agreement on ending competitive currency devaluations since quantitative easing weakens the U.S. dollar. The vice finance ministers also discussed curbing energy volatility, which would be taken up by France at the next summit. The G-20 Summit will officially begin today with a welcoming reception at the National Museum of Korea in Yongsan, central Seoul, at 6 p.m.

Following the reception, the leaders will sit down for a working dinner at the museum at 7 p.m. The dinner is likely to be a starting point for discussions on key topics. Tomorrow, the leaders will gather at COEX to attend two main sessions of discussions. The first session begins at 9 a.m. before their working luncheon. An afternoon plenary session will follow, and President Lee Myung-bak will give a press conference at 4 p.m. on the outcome of the summit. A special dinner will also be held today for participants in the G-20 Summit.