No deal on Korea-U.S. trade pact

No deal on Korea-U.S. trade pact 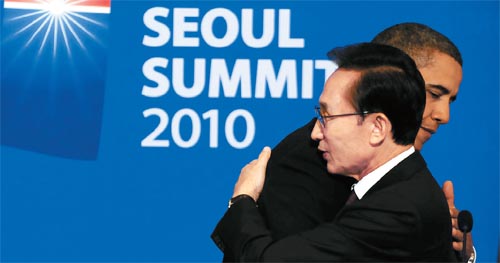 
The leaders of Korea and the United States failed yesterday to clinch a free trade deal before a self-imposed deadline, even after a meeting that went on for more than twice as long as scheduled.

But the two leaders vowed to continue with negotiations over the next few weeks.

“Let me tell you about the bilateral FTA,” President Lee Myung-bak said at a joint media conference after a 75-minute meeting with U.S. President Barack Obama, which went 45 minutes longer than originally scheduled.

“The two countries’ trade ministers discussed the issue, but only agreed that they need more time to resolve the details. They agreed to close a mutually acceptable deal as soon as possible,” Lee said.

Said Obama at the press conference: “We have asked our teams to work tirelessly in the coming days and weeks to get this completed.”

Obama said Korea will send a team to Washington for further discussions soon.

“We don’t want months to pass before we get this done,” Obama said. “We want this to be done in a matter of weeks.”

Lee also hosted Obama and his team for lunch, serving American beef, a diplomatic irony considering that the main sticking points in the negotiations are U.S. demands for fewer restrictions on Korea’s imports of American beef and automobiles.

After Lee and Obama made public their hopes to conclude the stalled agreement before the Group of 20 Summit in Seoul, last-ditch negotiations took place until Wednesday night, but Trade Minister Kim Jong-hoon and U.S. Trade Representative Ron Kirk failed to strike a deal. The issue appeared to have dominated Lee and Obama’s meeting yesterday.

The free trade agreement, signed in 2007 by previous administrations of both countries, is yet to be ratified by the National Assembly or the U.S. Congress.

On trade issues, Lee was asked at the news conference about Korea’s trade surplus with the U.S. and how he would deal with it, but Lee challenged the notion that the surplus is large.

Noting that Korea’s trade surplus with the U.S. is about $8 billion annually, Lee said trade is almost balanced when royalties and other fees are factored in because key components and technologies used in Korean exports to the U.S. are often from the U.S.

While their differences on the trade deal remained unresolved, Lee and Obama were on the same page on the topic of six-party talks to end North Korea’s nuclear weapons program.

They said the talks will not resume unless Pyongyang shows a serious willingness to give up its nuclear program.

“We reaffirmed that the complete, irreversible denuclearization of North Korea is a prerequisite for peace and prosperity of the Korean Peninsula and Northeast Asia,” Lee said.

“We also reaffirmed that the North’s responsible attitude for the Cheonan’s sinking and sincerity toward the South will be the starting point of constructive inter-Korean relations. We urge North Korea to change its attitude to this end,” Lee added.

Both Seoul and Washington blame North Korea for sinking the warship Cheonan in March, which North Korea denies.

He also said the United States is ready to provide economic assistance to North Korea and help it become part of the international community when the reclusive communist regime fulfills its obligations, such as denuclearization.

Obama added that Pyongyang must show a “seriousness of purpose” before the six-party talks restart, saying that there will not be more talks for the sake of talking.

Following his meeting with Obama, Lee had a brief one-on-one with Chinese President Hu Jintao yesterday afternoon at the Blue House. In addition to bilateral cooperation between Beijing and Seoul, North Korea was also discussed, presidential spokeswoman Kim Hee-jung said.

“Lee told Hu that he is grateful for China’s sharing its development experience with North Korea and sought Beijing’s efforts to urge Pyongyang to emulate China’s model,” Kim said.

According to Kim, Hu showed continuous support for Seoul’s efforts to improve ties with Pyongyang, such as providing humanitarian assistance and working-level military talks.

“Hu also said he had told North Korean leaders who visited China that improvement in inter-Korean relations is important for the peace and stability of the Korean Peninsula,” Kim said.