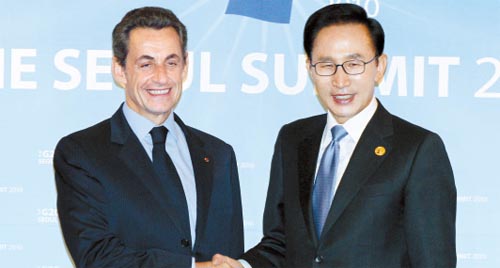 After 144 years, a royal collection of ancient Korean texts taken by France as war trophies will finally return home, presidents of the two countries agreed yesterday, ending a 19-year tug-of-war over the return of the Oegyujanggak books.

President Lee Myung-bak and President Nicolas Sarkozy of France held a bilateral meeting yesterday evening and agreed to the terms of the books’ return to Korea. At the bilateral, the two leaders reached “a de facto agreement” that France will return the ancient books, Hong Sang-pyo, Lee’s senior public affairs secretary, said yesterday.

“I would like to resolve the thorny problem lingering between the two countries,” Sarkozy was quoted as saying by Hong. “I would return the books on a five-year renewable lease basis, under the procedures of the domestic laws [of France].”

Ahead of the G-20 Summit, Sarkozy hinted that the arrangement to return the books was near.

Negotiations began in 1991 when Korea demanded that France return ancient Korean texts looted in the 19th century. The volumes in question belonged to a Joseon Dynasty royal library called Oegyujanggak. Historians have said that France looted the library in 1866, though Korea only learned of the French possession in 1975. The National Library of France has kept the books until now.

The royal texts from Oegyujanggak were seized by French troops during a punitive expedition on Ganghwa Island for the killing of French missionaries. France has insisted that the royal texts were legitimate spoils of war, refusing to return them.

Korea has long sought to retrieve the 297 volumes of royal texts that dictate the protocols of royal ceremonies and rights. One of the books was returned to Korea in 1993 by then-French President Francois Mitterand, but the rest remained in France.

Since then, the two countries have looked into a new compromise, in which Korea leases cultural relics of similar value to France while the French returns the royal texts. Negotiations, however, were stalled after France complained that what Korea offered was not comparable to the Oegyujanggak texts.

The deadlock, however, was resolved yesterday.