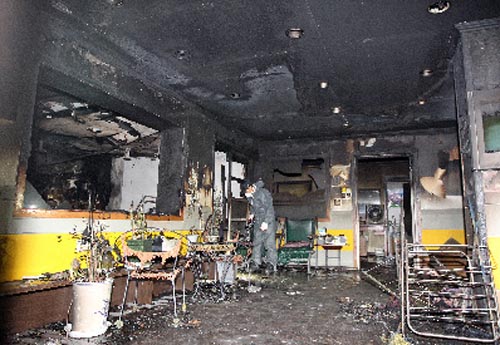 A police officer investigates a rehabilitation center for senior citizens after it was swept by fire in the port city of Pohang, North Gyeongsang, yesterday. The fire killed 10 senior citizens and injured 17 others. [YONHAP]

Ten people died and 17 others were injured in a fire that swept through a senior citizen rehabilitation center in the port city of Pohang, North Gyeongsang, yesterday.

According to police who are investigating the cause of the blaze, the fire appeared to have been started by an electrical problem in the ceiling of a first-floor office around 4:30 a.m., burning the two-story building.

The building housed a rehabilitation center for senior citizens suffering from paralysis and Alzheimer’s.

There were 27 women including two safety supervisors in the building at the time of the fire. Those killed in the blaze were sleeping in rooms on the first floor.

“I couldn’t fall asleep and I was lying in bed ... and my throat hurt terribly for some reason, and I called a staff member for help and I noticed there was a fire,” Kim Song-yi, 88, was quoted as saying by Yonhap News Agency.

“The center’s staff helped me to leave the room because I can’t move my legs well,” Kim said.

Police are questioning the center’s staff to determine whether the facility was fully equipped with fire extinguishers.

“If it turns out that the center had poor fire-extinguishing equipment, center officials who are responsible will be punished,” said a police officer who is investigating the incident.

More than 200 firefighters and 20 fire trucks were dispatched to the site and managed to put out the fire 30 minutes later.

Police said all the victims were women aged between 71 and 90.

Although firefighters extinguished the blaze quickly, some residents failed to get out of the burning rooms because their illnesses hampered their ability to escape.

“I was asleep but woke up as I saw light ... I went to check and I saw flames in the office of the building,” said a staff member surnamed Choi, who alerted firefighters of the blaze.

The North Gyeongsang Provincial Government formed a task force to provide financial aid and to set up a mourning altar for the victims.

Pohang Mayor Park Seung-ho said in a press briefing yesterday that the city will launch a fund-raising campaign to support the victims.

The mayor also said that city government officials will check the safety of 23 rehabilitation centers in Pohang.

The rehabilitation center had fire insurance that grants up to 100 million won ($88,600) per accident.

When briefed about the fire before departing for the G-20 Summit venue, President Lee Myung-bak said he was “deeply remorseful about the tragedy.”

Built in 1973, the rehabilitation center building was originally used as a community center.

A person surnamed Lee later bought the building and set up a rehabilitation center for senior citizens a year after the community center was relocated to another location in 2006.