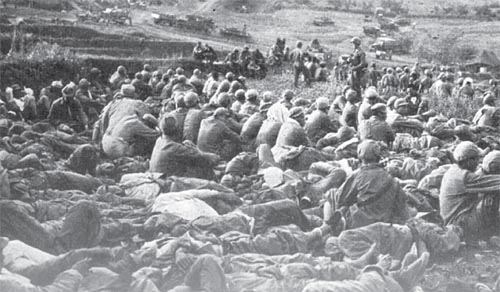 The Chinese PLA helped North Korea turn the tide of the Korean War in 1951, but would go on to suffer big setbacks. In the photo, captured Chinese PLA soldiers await detention. Provided by the U.S. Army

They gathered all their best units and focused on penetrating the ROK defensive lines along the central and eastern parts of the country.

But after struggling to hold the line in an area northwest of Sachang-ri in April of 1951, they were no match for the PLA and caved in during an overnight fight. The Chinese penetrated the defensive line. The area was technically under the purview of the U.S. 9th Corps, but the ROK 6th Division was in charge of defending the mountainous region.

It was a shocking defeat.

With the ROK 6th Division failing to defend Sachang-ri, Gangwon, the areas immediately south also looked shaky. After penetrating the defensive line, the PLA made their way west toward Gapyeong, Gyeonggi. The area was defended by the U.S. Marine Corps, the ROK 3rd Division and the British 27th Brigade. They put up a valiant, but futile, defense over several days against the PLA.

Two British brigades participated in the Korean War - the 27th and the 29th. The British 27th Brigade had been stationed in Hong Kong before being shipped to Korea at the outbreak of the war, while the British 29th Brigade was dispatched from England shortly after.

The British 29th Brigade exemplified exceptional valor in holding off the enemy at the Battle of the Imjin River, when Chinese forces tried to storm through the area defended by the British in an attempt to retake Seoul. A crucial battle took place at Hill 235. According to reports, the British soldiers were surrounded by 27,000 PLA troops. The 800 Brits were holed up on Hill 235 and by the end of the battle, 59 were dead, 522 were taken captive and 217 managed to stand their ground until the end of the battle.

Facing diminishing ammunition, supplies and fatigued troops, the Brits stood their ground for 60 hours before succumbing.

The British 29th Brigade’s stand on Hill 235 depleted the energy and morale of the PLA troops, but more importantly, it significantly weakened their offensive capabilities. The 1st U.S. Corps and its supporting units were able to fortify their defensive line around Seoul thanks to the efforts of the British 29th Brigade.

I had taken notice of their efforts in the past, but the Brits and their fight on Hill 235 left a lasting positive image of them in my mind. 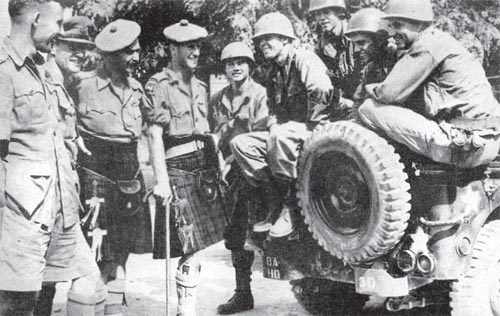 Two British soldiers dressed in kilts share a laugh with American soldiers in October 1950. Provided by the U.S. Army

The victories earned by the ROK 6th Division helped to heal wounded egos caused by the defensive-line loss at Sachang-ri.

After the ROK 6th Division failed to hold their line and caved to the Chinese PLA, President Syngman Rhee was said to have been approached by Gen. Matthew Ridgway, the supreme UN commander in Korea and Gen. James Van Fleet, commander of the U.S. 8th Army.

Angered by the manner in which the ROK 6th Division had failed to protect their defensive line - putting surrounding American and Korean troops at risk and increasing the chances of blowing the entire defensive line that stretched across the peninsula - the two commanders lashed out at Rhee for the incompetence of the ROK 6th Division at the time. The criticisms must have stung the aging president especially hard, since he stated on numerous occasions that if armed properly, the million or so determined young men of South Korea could defeat the communists without the help of the Americans or the United Nations.

Though the ROK Army was gaining confidence through combat experience as the war wore on, another sizeable loss to the Chinese PLA would have resulted in a disastrous blow to moral. The ROK Army was full of young soldiers eager to prove themselves in battle. Such enthusiasm, in part, helped the ROK armed forces to overcome deficiencies in military supplies and training, to a certain degree. But as eager as we were, I got a clear idea of how proper training could result in a ROK military that was as potent as the British 29th Brigade. 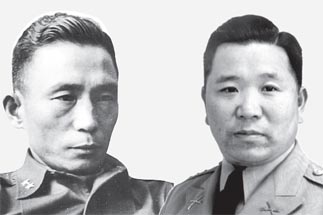 At around this time, I was busy inspecting the ROK 1st Corps’ defensive line. When I reached an area under the Capital Division of the ROK 1st Corps near the foot of Mount Seorak in Gangwon, Capt. Kim Hyun-wook, the company commander, provided briefings on the area.

He came across as a bright and ambitious officer. (In helping Park Chung Hee lead a military coup d’etat on May 16, 1961, he would go onto serve as the director of the Korea Central Intelligence Agency during the 1960s.)

From what I recall, Capt. Kim was well-spoken and delivered concise briefings. Like President Rhee, Kim was born in the Hwanghae Province, now North Korea.

It is not fair to generalize characteristics of individuals based on their regional affiliation, but both Rhee and Kim were clear when it came to their friends and foes. In terms of their social network, they either liked someone or disliked them and there was nothing in between.

It is part of the reason why Kim, who had been one of Park’s loyal followers, fell out of favor with the dictator years later. (Kim would go on to die at the age of 54 under mysterious circumstances.)

ROK 3rd Corps defended an area to the east of my 1st Corps soldiers. The ROK 3rd Corps was divided into the 3rd and 9th Divisions.

Although Park would go on to lead South Korea to a brisk export-led economic growth and Kim would go on to serve an important post in Park’s authoritarian regime, the two men were merely officers in charge of their respective combat troops during the Korean War.