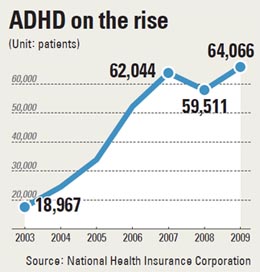 Not paying attention in class, getting bored with school assignments and blurting out inappropriate comments may seem like the definition of childhood and adolescence. But those are also the symptoms of Attention Deficit Hyperactivity Disorder (ADHD), a behavior disorder that is growing quickly in Korea.

According to National Health Insurance Corporation’s statistics, the number of adolescents diagnosed with ADHD jumped 2.4 times over the past six years from 18,967 in 2003 to 64,066 in 2009.

The corporation said 6.5 percent of young people from the ages 6 to 18 have ADHD. About 70 percent of patients suffer from the disorder until they reach adulthood, while 30 percent are successfully treated. Male children are four more times likely to be affected than females.

Children with ADHD have difficulty focusing on tasks, controlling their behavior and are hyperactive in ways that are more severe than in average kids.

According to the National Institute of Mental Health in the U.S., ADHD can be inherited or may be caused by a brain injury, a mother smoking, drinking during pregnancy or lead exposure.

“ADHD can be inherited from parents or caused by the lack of a neurotransmitter, such as Dopamine, or a degraded ability of the frontal lobe, which helps sustain attention and emotion control,” said Kim Yeong-gi, a professor at Ilsan Hospital, which is run by the National Health Insurance Corporation. “The patients need to receive medication and behavior therapy with their parents.”

According to the corporation, adolescents aged 10 to 14 account for 46.3 percent of all ADHD patients.

Ulsan, South Gyeongsang, has seen the largest number of patients followed by Busan and Gyeonggi.

As the number of patients increases, the amount of doctor’s fees paid by the corporation for ADHD treatment has skyrocketed as well, to 32.8 billion won ($29 million) in 2009 from 4.4 billion won in 2003.