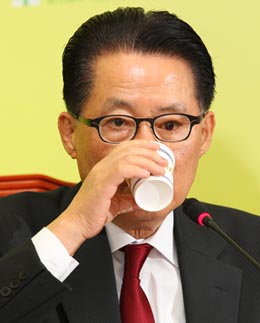 In an interview published Monday in the SiSa Journal, Lee In-gyu, who headed the powerful central investigation unit of the Supreme Public Prosecutors’ Office - which investigated the Park case - said the businessman admitted to bribing Park Jie-won, floor leader of the Democratic Party, and DP Representative Woo Yoon-keun, head of the National Assembly’s Legislation and Judiciary Committee.

Lee said prosecutors were unable to pursue the case because the probe was wrapped up hastily after Roh’s suicide in May 2009.

The two DP leaders angrily denied the accusations and threatened a defamation suit against Lee.

“What Lee said is absurd,” Park Jie-won said yesterday. “It is unacceptable for the senior prosecutor who was in charge of the probe to say such things. Because it is a serious case of defamation, I am preparing to take necessary legal measures with Woo.”

Lee was in charge of the probe into allegations that Park, former chairman of Taekwang Industrial and a long-time patron of Roh, operated a massive political payoff network to buy the influence of senior politicians, government officials and the presidential family. Roh committed suicide in May last year, shortly after he was questioned about the case by prosecutors.

“During the investigation into the Roh case last year, I had secured Park’s testimony, in which he said he provided bribes to political heavyweights of the opposition party,” Lee told the SiSa Journal. “During the questioning, Park testified that money was delivered to Park Jie-won and Woo.

“During the Roh administration, Park Jie-won received $10,000 at a Chinese restaurant on the second floor of Shilla hotel,” Lee was quoted as saying in the weekly’s Monday edition. “I am not sure the exact amount Woo received, but it was roughly $20,000.”

Lee said he was unable to investigate the allegations because the probe was wrapped up after Roh’s death.

In a telephone interview with the JoongAng Ilbo on Monday, Lee repeated his accusations. Lee left the prosecution in July last year after the probe was wrapped up. He is currently practicing as a lawyer.

The prosecution declined to confirm Lee’s accusations. The Supreme Public Prosecutors’ Office said the prosecution has no plan to reopen the probe.