Yun Jung-hee to get lifetime achievement award in Cairo

Yun Jung-hee to get lifetime achievement award in Cairo 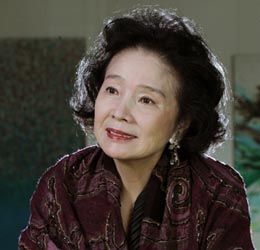 Veteran actress Yun Jung-hee will be the recipient of the lifetime achievement award at the 34th Cairo International Film Festival, which begins on Nov. 30.

Yun will become the first Korean to win such an award at an international film festival. She is also part of the festival jury.

“I was really surprised after realizing that I was going to win the award from Cairo because I didn’t have a prior relationship with the festival,” said Yun, who lives in France but was in Seoul last weekend with her husband, renowned pianist Paik Kun-woo.

The 66-year-old actress is experiencing something of a renaissance. Yun earned the best actress award at the Daejong Film Awards on Oct. 29 for her role in “Poetry,” which received the best screenplay award at the Cannes Film Festival in May. Yun’s Daejong award was the third for the actress from the nation’s longest-running award ceremony.

In Poetry, Yun’s portrayal of Mi-ja, a grandmother in her 60s who learns how to compose poems, earned rave reviews and she was mentioned as a strong candidate for the best actress award at the Cannes Film Festival by the foreign press (she did not win).

Poetry marked Yun’s return to the big screen after a 16-year absence.

After marrying Paik in 1976, Yun chose to live as the wife of an artist rather than continue her career as an actress and she moved to Paris to be with her husband, returning to Korea only occasionally to work in film. But it was not for lack of a successful career.

Before she left, she was one of the most celebrated actresses of her generation.

Yun was the reigning beauty of Korean cinema from the late ’60s to the late ’80s. She made her debut with a starring role in the 1967 film “Cheongchun Geukjang,” beating 1,200 other hopefuls for the job.

In her heyday, she starred in a total of 330 films, playing the leading role in all but five of them. Over the years, she has been honored with 25 best actress awards.