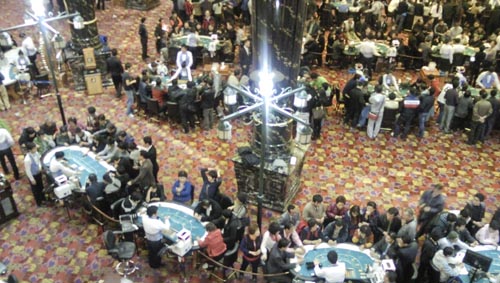 Gamblers take their best shot at the tables of Kangwon Land Casino. This is the only place where Korean nationals are allowed to gamble legally. By Shi n In-seop


The first time Kim set foot in a casino, the 52-year-old lost 40 million won ($35,000). In a desperate attempt to recover her losses, she poured another 300 million won down the drain. Now almost eight years later, she is penniless, having squandered 500 million won.

“I know I can never earn back all the money I lost from gambling. I even know it is best to just cut my losses and leave,” said Kim in Gohan-eup, Gangwon, on Thursday last week. “But I also know what it feels like to win.”

For the last eight years, Kim has visited the same casino every day.

Before she gambled away everything she owned, Kim, who requested anonymity, lived the life of a high roller. Back then, she had cash to blow and was not afraid to roll the dice. Known as a “big hand” in the industry, she had been a regular in the casino’s VIP rooms. Now she said she feels comfortable in this town, where everyone knows that she has lost everything at the casino.

On Oct. 28, 2000, Kangwon Land Casino was opened in an attempt to revive the economy in this backwater region that had long suffered since its mines were shuttered. It was the first casino in the country to allow Koreans inside. The hotel resort has 199 rooms, and the casino has 960 slot machines and 132 tables.

Supporters of the casino say it brings millions of dollars annually into the area, while its critics say any economic benefits are outweighed by myriad social externalities, such as growing gambling addiction that has caused an increase in suicides and thousands of wasted lives.

A significant portion of the local population in the nearby towns of Sabuk and Gohan are referred to as “casino panhandlers.” They live in cheap motels and jjimjilbang. They visit the casino every day and work menial jobs. Many have abandoned their families. They live to gamble.

“There are over 1,000 people I call nomads wandering Sabuk and Gohan,” said Lim In-ja, director for Hope Center, a rehab clinic for gambling addicts. The so-called casino panhandlers themselves estimate that their population is up to 3,000.

For its part, the casino a runs a counseling program for addicted gamblers. According to reports, about 1,600 people last year took part in the program.

The JoongAng Sunday visited Kangwon Land Casino last Wednesday and Thursday to take a closer look at the area’s gambling industry and its associated problems. 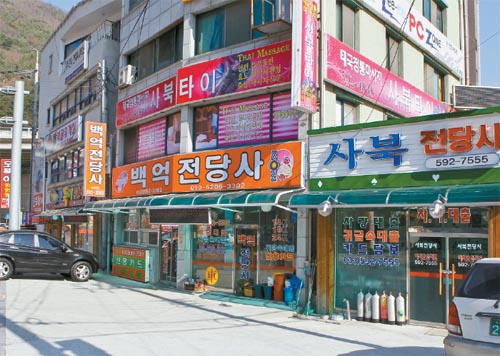 
Entering Kangwon Land Casino is like going through airport security. Even on a weekday, the slot machines and betting tables were filled with customers. Nine people sat around one of the blackjack tables. All put down three yellow chips worth 100,000 won apiece. This is the highest bet allowed. Ten others also playing stood behind those in seats. Millions of won were up for grabs. As cards were dealt, facial expressions hardened. Only the sound of chips hitting each other as they are tossed down could be heard. On these blackjack tables, fortunes are made, but many more are lost. Over at the baccarat table, when a man asked the dealer about the rules of the game, the dealer replied, “It’s better to not know, because that is how everyone starts.”

A jjimjilbang five minutes from Kangwon Land Casino is where some of the casino panhandlers live. In the smoking area, three middle-aged men gathered. “Today is dead,” said one man in his 40s who had just returned from the casino. “Dead” means “total loss” for these people. He had lost all the money he brought to the casino that day. The other man, who asked to be quoted as only Lee, said he abandoned his family in Chungju five years ago and has been living in Sabuk ever since.

He insisted he was not addicted to gambling. “I control my gambling, I only gamble with what I win,” Lee said. He said losing or winning up to 7 million won in a single day is no big deal.

The director of the gambling treatment center said gambling addicts calculate aggregates differently than casual gamblers. “The calculations of a gambler are different from a normal person,” said Lim. “If normal people lose 90,000 won in one day, they consider it a loss of 90,000 won. But gambling addicts calculate net wins and losses from the first day they set foot in a casino.”

There are many ways for gambling addicts like Lee to make a living. One way is to sell designated gambling seats in the casino. Another is to run errands for people. A number of pawnshops near Kangwon Land Casino have sprung up because people who are desperate for cash sell off personal items. Casino panhandlers also look for jobs at restaurants, motels and pick up one-day construction contracts.

“There are many ways for these nomads to make money,” said Lim. “You can even make a living just by picking up betting chips that have fallen on the floor.” 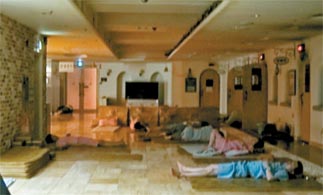 On the JoongAng Sunday’s second visit to Kangwon Land Casino at 4 a.m., there were only a couple people wagering at the small-stakes tables, where minimum bets are 1,000 won and maximum bets are 10,000 won. The tables where bigger wagers are allowed - minimum 10,000 won, maximum 30,000 won - were crowded. An announcement came 20 minutes before closing time: “The casino will close at 6 a.m.” It would reopen again at 10 a.m., giving gambling addicts a four-hour break. After the announcement, not one person is prepared to leave.

Business is booming for Kangwon Land Casino as customers from most age groups are increasing. The number of women frequenting the casino has been on the rise, as has those in their 40s to 50s. “The ratio between men and women is 7:3. Many men have their families to help them overcome their debt and gambling problems, but women are abandoned by their families in most cases,” said Lim.

More young people are visiting Kangwon Land Casino, too. It started when ski resorts opened in 2006. In another nearby jjimjilbang, a man who asked to go only by his surname, Kim, admitted that gambling had ruined his life and expressed concern for young gambling addicts. “It is really dangerous for younger people to fall victim to gambling addiction. My life is a failure because of gambling, but at least I had accomplished something before I lost everything. I’m worried for these youngsters who have not achieved anything yet in life. It is much easier for them to lose hope,” said Kim.

At 6 a.m., people slowly began leaving the betting tables and formed long lines at “comp card” machines. The comp cards allow members to accumulate points. The more they bet and the more time spent in the casino, the more comp points are awarded. The points can be redeemed within the hotel’s restaurants, supermarket, salons, etc. Comps are another source of living for gambling addicts.

Only three hours and 30 minutes later, the casino lobby was packed with people waiting for the opening. As the bell rang, a screen displayed numbers from 1 to 20. People with admission tickets scurried to the front, waiting their turn to enter the casino. With the announcement of each number, gamblers with corresponding entrance tickets entered the casino. This is the only way to avoid a stampede of people eager to get to the tables and slot machines.

Kim, who lost 500 million won, recalled the beginning of her gambling addiction. She had decided to visit Jeongdongjin about eight years ago. “I came to see the sunrise in Jeongdongjin before I first wandered into Kangwon Land. It was Jan. 1, 2003,” said Kim at a jjimjilbang, where she now lives.

“Eight years have passed. It was originally just a vacation. Now it seems like I lost 500 million won in just seconds.”