Worker sets himself on fire in protest

Worker sets himself on fire in protest 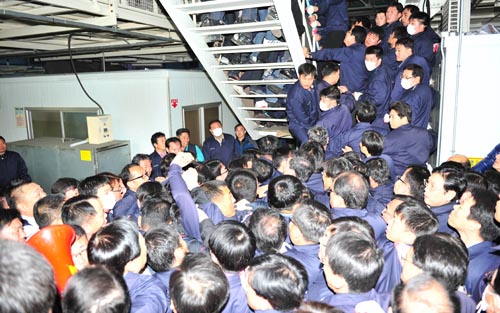 A labor union of temporary workers of Hyundai Motor blocks the plant manager from delivering an order to evict them from the factory in Ulsan, South Gyeongsang, Saturday. About 550 workers took over the factory on Nov 15. [YONHAP]


A worker set himself on fire at the Hyundai Motor factory in Ulsan, South Gyeongsang, Saturday, deepening the conflict between temporary workers and the company. The workers are demanding they be made regular employees.

The 33-year-old worker, Hwang In-ha, who participated in a demonstration led by Korean Confederation of Trade Unions at the main gate of the factory, suffered second-degree burns on his arms and ears, and was hospitalized. About 550 temporary employees took over parts of the factory on Nov. 15, requesting regular positions.

Police say the number of protesters was estimated at 400. “Hyundai Motor should stop violence towards us,” the employees said in a statement. “If you [Hyundai Motor] want to solve this problem in a peaceful way, you should show up at the negotiating table to talk about giving us permanent jobs.”

Kang Ho-don, the head of the factory, was injured on his way to deliver an order to evict the workers from the factory that they had occupied. One hundred-seventy other temporary workers tried to join in the protest, but were blocked by factory managers spraying water and other material from fire extinguishers.

The Ulsan District Public Prosecutors’ Office arrested the head of the protesters, Jang Byeong-yun, on charges of leading a violent demonstration. Hyundai Motor said the factory, which manufactures the new model “Accent,” had about 91 billion won ($80 million) in production losses up to yesterday due to the workers’ protest. The company said the factory was supposed to produce about 7,730 cars from Nov. 15 to yesterday but all production was stopped.

The Supreme Court said in July 2009 that the company should elevate some temporary employees to regular positions. The case was sent to the lower court to retry the case in accordance with the Supreme Court.

After the Supreme Court’s ruling, the workers asked for change, but the company denied it, saying the case is under retrial in the lower court, which had provoked the protest.