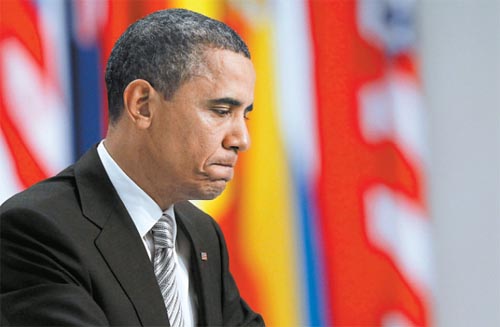 
Negotiations over the Korea-U.S. free trade agreement have put the government between a rock and a hard place. If Seoul concedes too much to Washington, the Lee Myung-bak administration fears another political blowback like after the 2008 beef deal.

And yet the government also fears that stubbornness on its part could damage U.S.-Korea relations and the personal bond that has developed between Lee and U.S. President Barack Obama, who’s been seriously criticized for failing to get a final deal in Seoul this month.

The most likely concessions are on tariffs and safety restrictions that limit U.S. car imports to Korea.

“If the FTA is not settled soon, we may spark a second Toyota crisis in the U.S.,” a Blue House official said Sunday, referring to the Japanese carmaker’s image problems in the U.S. after faulty gas pedals in its cars led to deaths. The view was also shared by other senior administration officials.

“About 500,000 Korean cars are sold in the U.S. every year, but less than 3,000 American cars are imported here,” said a senior government official. “It’s no wonder that the U.S. has sour feelings about Korean cars.”

“Korean carmakers who export to the U.S. do not want barriers against U.S. automobiles in the Korean market,” said the official. “They worry about the possibility that Korean cars will garner hostility in the U.S. and face a crisis like Toyota.”

The Blue House and the government believe that Americans’ displeasure with Japan’s trade surplus with the U.S. helped fuel criticism of Toyota after massive recalls.

The Blue House is also aware that Obama’s political travails, particularly after the Democrats’ big loss in the recent midterm elections, will be worsened by a failure of the FTA negotiations.

Richard Haass, president of the Council on Foreign Relations, recently said that Obama’s failure to conclude the FTA during his visit to Seoul earlier this month was the “worst” among many shortcomings of the president’s Asia trip.

Obama tried hard to wrap up the deal during a summit with President Lee at the Blue House on Nov. 11. The meeting was originally planned for 30 minutes, but it went on a further 45 minutes. A Blue House official said Lee spent a significant amount of the time trying to console a disappointed Obama.

Since taking office, Obama has supported Korea on many fronts, including its ambition to host the Group of 20 Summit and a plan to delay the U.S. handover of wartime operational control of Korean forces.

The idea that Korea must make more concessions on the FTA is growing stronger in the Blue House.

“We must not approach the FTA from only an economic point of view, but with a comprehensive perspective of an alliance,” said an official.

“If the friendship of the two presidents is damaged, other important issues could be affected, so it is important to conclude the FTA as soon as possible,” another official said.

The key is the public sentiment in Korea, officials said. “Even if we make a concession on automobiles, there is much more that Korea will gain through this accord,” said a senior government official, who spoke on the condition of anonymity. “Even if we achieve a desirable outcome, it is possible we’ll face a bashing for making concessions to the U.S. That is our concern.”