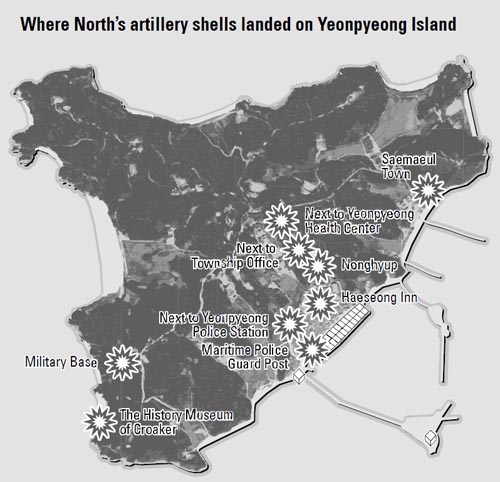 North Korea had planned to fire more shells than the roughly 170 rounds that fell on Yeonpyeong Island and the waters around it, but a counterattack by South Korea damaged their equipment, South Korean military officials said yesterday.

The South, however, did not describe the extent of the damage, adding to the list of unanswered questions over the first inland skirmish between the two Koreas since the Korean War.

The attack by the North left two marines and two civilians dead.

“After the North Korean military fired roughly 150 rounds in the first 12 minutes of the attack, they prepared for a bigger attack but were unable to do so once our military retaliated with K9 howitzers,” said a South Korean military official. Another 20 rounds were fired after the initial attack. 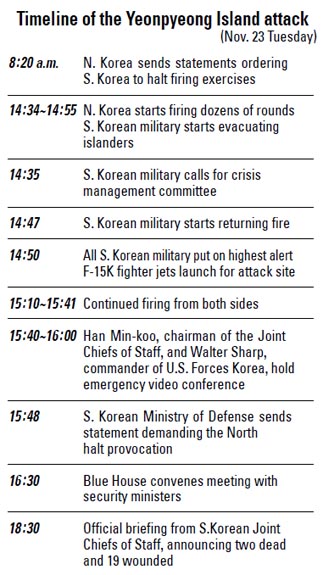 The K9 is a South Korean self-propelled howitzer developed for the South Korean military by Samsung Techwin. The weapon can fire six 155-millimeter rounds per minute.

“Because the K9 is very accurate, the North Korean military bases were probably reduced to rubble,” said the official.

South Korean Minister of National Defense Kim Tae-young said during a hearing at the National Assembly’s Defense Committee yesterday that images of the North Korean coastline were hard to obtain “because of the clouds in that direction.”

The military could not confirm how much damage had been done by the South’s retaliatory response. The defense minister said military officials were working to determine the extent of the damage.

More questions were lobbed at Kim yesterday, with lawmakers demanding to know why the South Korean military had taken 13 minutes to start firing back after the North initiated firing at 2:34 p.m.

“According to our military tactics, I believe we did very well if we responded in 13 minutes,” said Kim after lawmakers accused the South Korean military of being slow to respond.

The defense minister said the soldiers had to take shelter during the first attacks and rotating the guns in the direction of the attack took time, said Kim. “To fire while you’re on the receiving end is like committing suicide,” said one South Korean military official.

The minister also explained that the North’s attack was unrelated to the joint Hoguk exercise between South Korea and the U.S. and that North Korea had bombarded the island because of monthly shooting exercises near the disputed maritime border between the two Koreas.

“We are indeed in the middle of Hoguk exercises but the training that took place near Yeonpyeong Island was not part of the Hoguk exercises, but monthly shooting exercises,” said Kim.

When asked if any of the South Korean rounds fired during the exercise had crossed the border accidentally, triggering the attack, Kim said the South Korean military prepares “with caution” and keeps their firing “4 to 5 kilometers [2.5 to 3.1 miles] away from the Northern Limit Line.”

North Korea had sent statements before the attack on Tuesday, warning South Korea to halt the Hoguk exercises. Kim said that North Korea had complained about the routine firing exercises in the past, but it was the first time for them to have acted on it.

In a report turned into the Defense Committee of the National Assembly yesterday, the Defense Ministry confirmed that North Korea had fired roughly 170 rounds toward Yeonpyeong Island.

“Around 80 rounds landed on the island, while about 90 rounds landed in the waters surrounding the island,” the report said. The South Korean military fired 80 rounds from K9 howitzers. The Defense Ministry also said troops have been “status ready” for firing since the attack, with five fighter jets on standby.