North sets off more guns ahead of joint drill

North sets off more guns ahead of joint drill 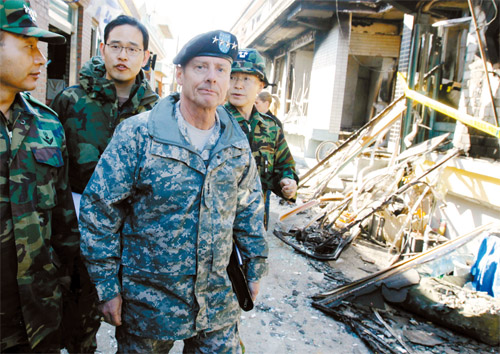 
North Korea yesterday fired artillery shells within earshot of Yeonpyeong Island, which was shelled Tuesday, when the commander of U.S. Forces Korea toured the island.

South Korea’s forces adopted emergency postures, and the few remaining residents of the island were evacuated to air raid shelters after the booms of the North’s guns were heard, which later turned out to be a firing exercise. “Blasts were heard several times [in Yeonpyeong] from the inland area of Gaemori, North Korea, between 12:20 p.m. and a little past 3 p.m.,” said an official of the Joint Chiefs of Staff at a briefing. “No [shelling] fell on South Korean territory or in its waters.”

The official said the North was estimated to have fired around 20 shells as part of a training exercise. The firing came as South Korea and the U.S. moved armaments and personnel to the Yellow Sea for a joint naval drill set to start tomorrow.

Right before the firing, North Korea announced that the upcoming Seoul-Washington drill would bring the Korean Peninsula to the brink of an all-out war. “The situation on the Korean Peninsula is inching closer to the brink of war due to the reckless plan of those trigger-happy elements to stage again the war exercises targeted against the DPRK [Democratic People’s Republic of Korea],” said the Korean Central News Agency, the North’s official mouthpiece.

The four-day joint naval drill is a move coordinated between President Lee Myung-bak and U.S. President Barack Obama as a response to the bombardment of Yeonpyeong Tuesday, which killed two marines and two civilians and led to an exodus of most of the island’s residents.

The drill, which the U.S. Forces Korea says is defensive in nature, involves the 97,000-ton U.S. nuclear-powered aircraft carrier U.S.S. George Washington, the U.S.S. Stethem destroyer and approximately 10 other ships from the U.S. and South Korea, according to the South Korean military.

Gen. Walter Sharp, the commander of around 28,500 U.S. troops in South Korea, visited Yeonpyeong yesterday to see the extent of damage from Tuesday’s attack, in which 170 artillery shells were aimed at the island. The South responded with around 80 shells. The shelling was an obvious violation of the Armistice Agreement, Sharp told reporters during his visit.

On Thursday, the North, through its state media, said the disputed maritime border between the countries, the Northern Limit Line, was one of the reasons for Tuesday attack.

The NLL, drawn by the UN Command after the Korean War, is considered a de facto maritime border by the South, but is denied by the North, which claims a more southern maritime border. Yeonpyeong is close to the NLL.