Amid tension, drills underway in area

Amid tension, drills underway in area 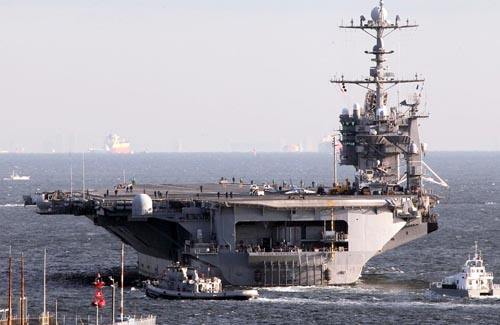 The U.S. aircraft carrier U.S.S. George Washington sets sail on Nov. 24 from Yokosuka naval base, south of Tokyo, and heads to Korean waters to take part in a joint military drill with South Korea that began yesterday. [AP/YONHAP]


Five days after North Korea’s deadly shelling of a South Korean island, South Korea and the U.S. yesterday initiated one of the largest joint naval drills in decades in the waters off the western coast of Korea. The nuclearpowered super carrier U.S.S. George Washington is also participating.

A defiant North Korea again talked of retaliation, saying the drill puts the Korean Peninsula into an “ultra-emergency wartime situation.”

The South detected that North Korea was installing a missile launching system on Sunday in the same area as the attack on Yeonpyeong Island, which triggered the South to order island residents to evacuate to air raid shelters and to order press reporters to leave the island, which is near the inter- Korean maritime border in the Yellow Sea.

“The scope of armaments mobilized for the joint drill this time is similar to that of the Invincible Spirit [a joint drill conducted in July after the Cheonan sinking], but the intensity of the drill will be higher,” said Joint Chiefs of Staff official. “Troops will attend live-fire shooting and bombing drills.”

The 97,000-ton George Washington was mobilized in that drill, but it was carried out in the East Sea because of China’s strong opposition.

This time, the U.S. aircraft carrier has more than 5,500 sailors and 75 aircraft on board near Taean, South Chungcheong. Taean is more than 75 miles south of Yeonpyeong Island.

“The venue of the drill is near Eocheong Island and Gyeongnyeolbi Archipelago and other places where joint exercises are convened usually,” said a Joint Chiefs of Staff official. “It will not be conducted any further north.”

The Gyeongnyeolbi Archipelago is 55 kilometers (34 miles) west of Taean. The latest drill involves more than 10 warships from the U.S. and South Korea, including the 9,600-ton U.S.S. Cowpens, the 9,750-ton U.S.S. Shiloh and the U.S.S. Stethem.

Joint Chiefs of Staff officials said the drill will focus on antiaircraft defense and naval surface warfare, whereas Invincible Spirit was centered on anti-submarine warfare.

The joint drill, which U.S. Forces Korea said is defensive in nature, comes as the North raised the extent of its provocations after the revelation of uranium enrichment facilities and the Cheonan incident. Forty six South Koreans sailors were killed in the March sinking. President Lee Myung-bak yesterday called the North Korean provocations a “grave shift of course.”

The North has claimed that Tuesday’s attack, in which four South Koreans including two civilians were killed, was self defensive, referring to South Korean military exercises conducted at the time near the Northern Limited Line, a de facto maritime border line that the North refuses to acknowledge.

China, under pressure to rein in its longtime ally North Korea, remained watchful over the joint drill but without taking additional measures after issuing a statement on Friday reiterating its opposition in principle against a joint drill in the Yellow Sea.

“We hold a consistent and clear-cut stance on the issue. We oppose any party taking any military actions in our exclusive economic zone without permission,” China’s Foreign Ministry spokesman Hong Lei said in the statement.

Hours after the joint drill began about 6 a.m., a suspicious North Korean move was detected, with the North Korean military deploying its 122-millimeter multiple launch rocket systems and surface-to-air missiles at its bases near Yeonpyeong Island, with several blasts appearing from firing exercises heard on Yeonpyeong.

That forced remaining island residents to be moved to other air raid shelters.

The Ministry of National Defense also ordered about 400 domestic and foreign journalists who had came to Yeonpyeong to cover the story to leave by the end of yesterday, citing concerns of possible provocation by the North after the South’s joint naval drills with the United States.