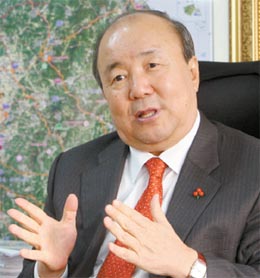 The government is considering financial support for the debt-ridden Korea Land and Housing Corp. to carry out public projects if the state-run real estate developer encounters difficulties raising capital, said Minister of Land, Transport and Maritime Affairs Chung Jong-hwan in an interview with the Korea JoongAng Daily. He added, however, that the company needs to reduce its debt through restructuring rather than expecting a government bailout.

“It is true that Korea Land and Housing Corp. has faced a liquidity crisis because of the large debt that it incurred from its public projects. But to solve the problem, it is important to concentrate on restructuring and selling unused land,” Chung said.

If the company finds it difficult to raise capital on its own for public projects such as building low-cost housing for the poor, Chung said, “the government is considering increasing state support to a realistic level for low-cost housing projects, which have mainly contributed to the mounting debt.”

The Korea Land and Housing Corp., or LH for short, saw its debt grow to 118 trillion won ($103 billion) in the first half of this year and now is suffering a liquidity crunch. It has had a hard time issuing bonds and raising capital.

To reduce debt, LH tried to discontinue some high net-loss projects, but the planned cancellations stirred controversy, as residents who live on or own land that had been slated to be developed by the company strongly protested. LH originally planned to announce the scope of the projects to be postponed, curtailed or eliminated by Nov. 30.

“It is inevitable to reorganize some of the businesses due to financial hardship caused by economic recession and overexpansion, but I believe it is important to minimize potential damage to the residents,” said Chung.

LH was created last year by merging two state-run companies - Korea National Housing Corp. and Korea Land Corp. In the past, the two companies competed with each other for government projects, and overheated competition between the two only increased their cost and debt.

Even after the merger, it has still not decided where to relocate its headquarters. Korea Land was originally going to move to North Jeolla as part of the previous administration’s plan to relocate government and public institutions from the Seoul metropolitan area to other regions. Meanwhile, Korea National Housing planned to move to South Gyeongsang for the same reason. The problem is that the two provinces are competing to attract the merged company’s headquarters.

Chung said he encourages the two provinces to make concessions and “try to come up with a conclusion by the end of this year.”

One major decision made by Chung this year was to ease the debt-to-income loan regulation to boost the real estate market, which was announced on Aug. 29. The DTI rule limits the mortgage amount a borrower can take out taking into account the borrower’s income. According to Kookmin Bank, average apartment prices in Seoul rose for the first time in nine months last week. However, it is not yet seen as a complete recovery.

Chung recently said that he would not lay out new policies to boost the real estate market, saying he is waiting to see the August measure take effect.

Regarding the issue on whether apartments in Korea are still overvalued compared to those in developed countries, Chung said Korea’s housing prices are not necessarily that much higher than those of foreign countries when income level is taken into account.

“Housing prices are expected to stabilize or slightly fall, but considering supply and demand, it is less likely that housing prices are going to plunge in [the near term],” Chung said. “There are still not enough houses in the country and the quality of housing is still low in Korea compared to developed nations.”

On the controversial four-rivers restoration project, which the ministry leads, Chung denied that the intent is to build canals.

“President Lee Myung-bak said several times that he would not build canals,” Chung said. “Most of all, there is no plan to connect the Han River and Nakdong River, which would be the key to building a [nation-wide] canal.

“It is impossible to build canals in President Lee’s term. There is no time and it is physically impossible.”