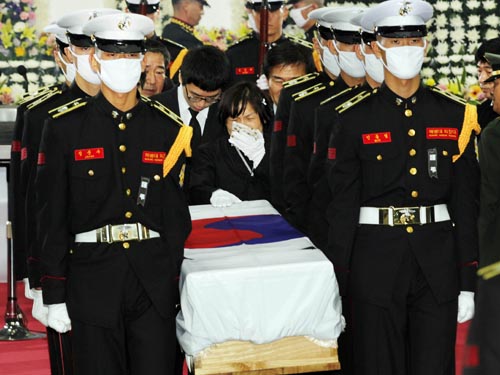 South Korean marines carry a flag-draped casket containing the remains of a marine killed in Tuesday’s North Korean bombardment of Yeonpyeong Island during a funeral service at a military hospital in Seongnam, Gyeonggi, Saturday. [NEWSIS]


After a joint funeral Saturday for the two marines and two civilians killed in the North’s shelling of Yeonpyeong Island, marines and navy men yesterday held a protest in Seoul, urging the government to take stronger action against North Korea.

“We take revenge on North Korea for the deaths of our fellow soldiers, a hundred, a thousand times what they did to us, so that the North will bitterly regret what they’ve done,” said the commander of the Korean Marine Corps during a speech.

“How could North Korea carry out such an inhumane act on our proud fellow soldiers? We, the Korean Marine Corps, will not stand for this anymore.”

Relatives wept as the two soldiers’ lives were described during the ceremony.

The sorrow deepened when Marine Corps members sang a military song while the caskets were taken out at the end of the ceremony. The families wailed, crying that they couldn’t let their children go.

While the funeral ceremony was occurring, about 1,500 marines released a statement in front of Gwanghwamun Building, central Seoul, harshly criticizing North Korea’s shelling of the island.

In the statement, the marines said: “Our innocent and precious civilians and marines were sacrificed [in the] military assault on Yeonpyeong Island, an apparent provocation threatening the international community. The government should stop giving financial aid to the North and carry out a strong response.”

“The pro-North Korean activists, who have supported the North’s violent forces in previous provocations - the Yeonpyeong attack and the sinking of the Cheonan - should be [gotten rid off],” the marines said in a statement. “The previous South Korean governments [which were inclined to be leftist] weakened the military’s strength in the name of striving for peace.”

The Underwater Demolition Team, a special navy brigade, held a rally at a children’s park beside the Ministry of National Defense.

“[The government] should not step back from the sacrifices of its people anymore,” the UDT said. “It must retaliate against North Korea, which carried out a merciless act.”

During the rally, about a dozen people shoved police. The protesters were taken to a police office.