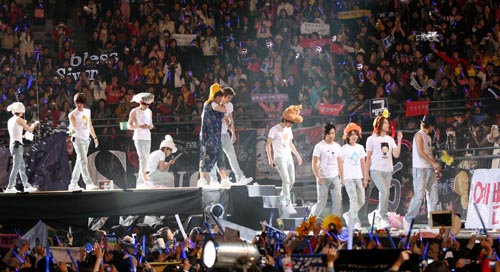 Korean band Super Junior performs at Nanjing Olympic Stadium in China last December as part of its Asian concert tour. Around 10,000 people gathered for the concert. The popularity of the Korean wave is allowing Korean bands to create new markets for pop music. Provided by SM Entertainment

Fans screamed as Korean pop groups such as the Wonder Girls, 2PM, Beast and Four Minute appeared on stage. The crowd of mostly Thai citizens cheered and sang along to the Korean songs.

This scene was a repeat of a concert by K-pop group Super Junior last December, in which the stadium was packed with around 10,000 people. The concert, at Nanjing Olympic Stadium in China, was part of the same series.

Mnet Ultimate Live in Asia, which started in August in Taiwan, is a vehicle for concerts by major Korean groups. Each concert has had attendance of more than 10,000 and each has brought in sales of at least 600 million won.

The concert series, and the huge crowds it attracts, provides strong evidence of the growing popularity of Korean bands that are blazing trails into new music markets throughout Asia.

With the downturn in the domestic music industry, Korean entertainment management agencies are focusing on organizing concerts overseas. And their concerts are selling out in Asia and beyond.

This year, Super Junior held a total of eight concerts in China, Taiwan, the Philippines and Malaysia. The total attendance from these concerts is estimated at 100,000 and, with a ticket price of about 80,000 won each, sales from the concerts are estimated at approximately 8 billion won.

The Wonder Girls, which entered the U.S. market last year, held 27 concerts in North America this year. And Girls’ Generation drew audiences of 20,000 at a showcase in Tokyo in August. The group formally entered the Japanese market in early October, hitting first place on the Oricon chart, the Japanese version of Billboard.

“Concerts held throughout Asia can be a new market for Korean musicians,” he said.

Groups that have not yet made a formal entry into overseas markets are also doing well. SHINee has already sold out of tickets at a 24,000-seat venue in Tokyo for a concert on Dec. 26, even though they have yet to make a formal debut in that country.

This wave sweeping through Asia is not just for up-and-coming K-pop groups. Even veteran musicians have benefited from the popularity of Korean music overseas.

Lee Moon-sae, who started his career in 1978, held a solo concert in Orchard Hall in Tokyo, Japan, this September that attracted 2,000 people.

Shin Seung-hoon, who is celebrating his 20th anniversary in the music business this year, is targeting the U.S. and Australian markets, building on his previous success in Japan.

And it’s not just the live shows that are reigniting interest in Korean music.

Mnet’s Asian Music Awards, which were held in Macau on Sunday, were shown live in a four-hour telecast in 13 countries on stations like TDM in Macau, GMM in Thailand and SCTV in Vietnam.

The Golden Disc Awards, sponsored by local daily Ilgan Sports, will be streamed live on MSN in seven Asian countries on Dec. 9.