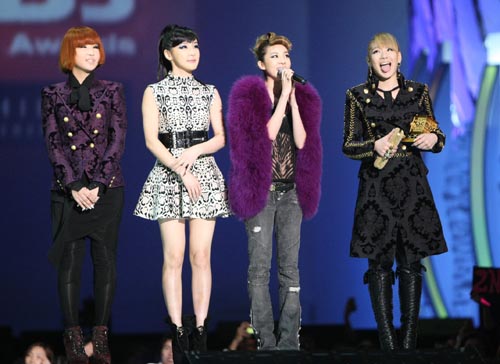 2NE1 won the most awards on Sunday at the Mnet Asian Music Awards, the first Korean pop music ceremony in a foreign country. [Yonhap]

The awards ceremony drew more than 10,000 fans from all over Asia.

But despite the high attendance, event organizer Mnet, a Korean cable channel, is facing criticism that the awards were not distributed fairly.

Musicians that participated in the ceremony were from only two management companies - JYP Entertainment and YG Entertainment - with the exception of D.J. D.O.C.

In addition, awards for four artists that could not attend the event - CN Blue (Best New Male Artist), 2AM (Best Vocal Performance by a Group), BoA (Best Female Artist) and Jo Kwon and Ga In (Best Collaboration) - were not mentioned during the awards ceremony.

The primary reason for the artists’ absence appears to be related to the underlying friction between Mnet and SM Entertainment, whose artists did not attend Sunday’s ceremony.

Neither company has spoken about the tension, but there is speculation that it came about from a long-standing rivalry between artists from SM Entertainment and YG Entertainment, which Mnet is said to support.

The biggest losers in that battle may be the fans. A fan from Hong Kong said after watching the event, “It was great to see Big Bang and 2PM perform. But I was sad to see that Girls’ Generation and Super Junior weren’t there.”